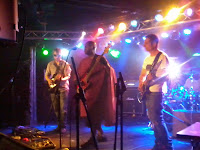 Tonight, the good shepherd of funk, Pastor Funkpleez along with His Pulpit Players preached on the holiness of the funk sound …to get our souls jivin’ to the smooth bass beat and electric rhythms at Elbo Room. To help everyone get down with their bad selves, there were performances by We Are The Sea, Brian Wheat Band and Rumors of War with local band Jesters.

Combining a hot rhythm section and dynamic vocals as well as an energetic sound is what Jesters brought the stage during their performance tonight, readers. From the moment they stepped on stage until the last note had died, each member of this band was rockin’ hard especially in their costumes of the night – the band in white hazmat suits while Barbara was the sexy alien in her sassy skirt and boots. This isn’t the first time the Jesters appeared on stage with some sort of eclectic costume. SouthSide remembers when they appeared on stage in matching band uniforms or even furry animal costumes (during one of the hottest nights in summer). Who knows what they will wear at their next show? Yet, do expect them to wear something fun that will certainly enhance your live show experience and excitement. Now …back to the music, blogspot readers. Throughout the night, Jesters rocked with an energetic upbeat swing as well as fiery spunk and lots of rhythmic gas (provided by the horn section). There were plenty of toe-tappin’ moments to get you groovin’ along with the band even while slowing down the tempo just a bit to allow Barbara’s vocals to shine under the spotlight. As the band’s female lead on vocals, she adds sexiness and sultry attitude (especially when expressing it via her body language) besides wowing the audience with her soulfully dynamic voice. For example, during the cover of Joe Cocker’s The Letter (“…my baby wrote me a letter…”), she upped the dynamic tone in her vocals to match the band’s upbeat and rhythmic sound which rocked out their set more than their cover of Pat Benatar’s Heartbreaker. It was valiant effort, blogspot readers, but this reviewer had to note that the 80s pop/rock sound doesn’t really work well with the horns. Still with a band like the Jesters, it’s all about the fun and making sure their audience has a great time rockin’ with them. For when and where the Jesters will hold court at venue near you, visit http://www.jestersonline.com/. 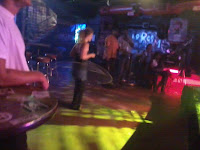 Now, readers, you’re invited to join the congregation of funk featuring the good Pastor Funkpleez and his Pulpit Players as “services” began with some shout outs and band introduction during Pass the Funk. Soon afterward, Pastor and the band had the room swaying to the rhythmic downtempo beat that also had a slight upbeat swing to keep many in the groove while he “preached” about getting Somethin’ From Nothin’. This reviewer immediately enjoyed the soothing, groovi-licious sound especially when the band jams during the instrumental bridge …taking the audience nice and slow or fast and short with its funk flow. Yes, this band was all about the funk and much more. If you listen closely to what Pastor Funkpleez’s preaching, there’s a message to heard and learned within each song performed only if you’re willing to listen. For example, in his ultra smooth voice, Pastor dispensed a bit of knowledge on us during the song Somebody Lied while keeping the basement lounge within the Pulpit Players’ funk groove. This reviewer has heard Prince’s hits and rarities done in many styles from acoustic to rock but never heard him covered by a funk/soul band like she did tonight, blogspot readers. 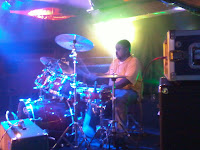 During this particular performance, Pastor Funkpleez took the upbeat pop version of Prince’s Let’s Go Crazy rendering it to sound slow within a downtempo funk beat that had an intense guitar riff work and groove. This wasn’t the only time SouthSide along with the audience felt the sanctified intensity of this funk band’s guitar groove. Listen to songs such as GoHigher and Bumpskool where Pastor Funkpleez will up the funkified music and tempo for a hula hooper and others to shake the hoop to the beat. However during this performance, this reviewer did notice something was missing – a female vocalist. It would have been nice if Cedric aka Pastor Funkpleez had a dynamic soul sister to add some depth and soul as well as some sexy spice to a couple of songs like GoHigher, Somebody Lied or Dance 4 Meh. A female vocalist who could help the Pastor spread the message to the congregation especially while he jams with the band, blogspot readers. And it seems SouthSide and the band are on the same wavelength with this suggestion since they’re currently looking for a female vocalist for backup duties. Overall, this reviewer highly suggests getting sanctified by funk/soul/groove sound by this Pastor and his Pulpit Players when and where they hold “services” again at venue near you. For more information, you can find Pastor Funkpleez on Facebook or follow him on twitter athttp://www.twitter.com/PastorFunkpleez.

Until next time, support your local scene,
SouthSide