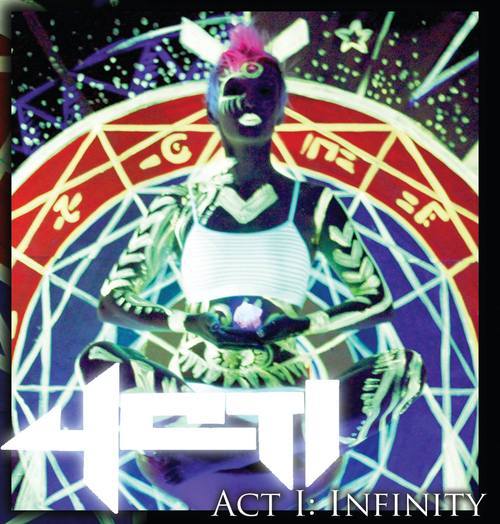 I know all of you have experienced the following in one way or another:  You are either at work, or doing something around the house, apartment, garage, trailer, or cardboard box, and you’ve got music blaring in the background because silence utterly sucks.  You have your shit on random, or on some sort of playlist you’ve made, and you try to do your routine.  Then, the music stops you.  You do not concentrate on whatever you are doing anymore, you just sit and stare at the computer screen, stereo, or mp3 player interface and rock your ass off.   Yeah, I was supposed to wash my damn dishes and clean up my house, but thanks to YETI’s release, “Act 1: Infinity”, that never happened.  However, do not get me wrong, this is not, in any way, shape or form, a bad thing.  I listened to this album from start to finish three times after it grabbed my attention with its first track, “Space Wolf Odyssey”.  How do I describe YETI?  Metalgasm.  It is rare these days to hear someone sing with such power and emotion.  The vocals, sang by Nestor Quezada, are absolutely punishing!  One second he is screaming in Spanish, then in English, then he growls like my stomach sounded pre-Thanksgiving dinner, and then he screeches and screams like I do on mornings after I’ve eaten too many jalapenos.  His clear vocals are on point and great, also, and so many different vocal styles are used and are so well placed on YETI’s first release.

What would I compare YETI’s sound to?  For starters, this is one hell of a mash-up.  I hear so many different influences in “Act 1: Infinity”.  I hear Iron Maiden, Mastodon, and I hear some old school Slayer.  This is such an amazing progressive/thrash/melodic/”destroy-your-face” album.  Miguel Cordova (lead guitar), Gus Matchain (bass), Matt Getto (drums), and Quezada on vocals bring out all things brutal on their release.  I am really excited about this band.  They have a bright future ahead of them.

I made it no secret to YETI that this album has really attached itself to me, so I reached out to them with a couple of questions about “Act 1: Infinity” and its meaning…. Here is the info I have gathered:

This album was not meant to be a concept album, but as it came together, it kind of turned into one.  “The common theme was rejection of preconceived ideas and ideologies along with a strong desire to question everything,” waxes bassist Gus Matchain wisely, and continues,  “We are incredibly interested in philosophical concepts ranging from Nietzsche, who is quoted right before ‘Spider King’, to Ray Kurtzweil, whose idea of the ‘Singularity’ inspired the song of the same name.  We don’t want to write songs about nothing.  We stand by the mentality that we want to be unbound by genres and categorization with our music.”

There you have it folks.  I STRONGLY suggest you give these guys a listen.  Pick up a copy of their album, I guarantee you this release will blow your face off!

To check out YETI, and to check out their mashed-up sound, head here: