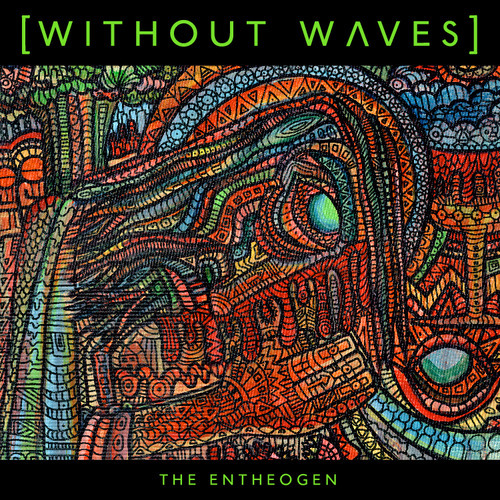 While some bands are adept at staying simple, Chicago’s progressive/technical metal titans, Without Waves, prefer the exact opposite.  Mixing and mashing their influences, changing time signatures rapidly, possessing a compelling command of their instruments…these are just a few of the myriad of talents and traits on display on Without Waves’ latest E.P., “The Entheogen”.  While comprised of only a scant three tracks, the two original compositions and one cover boldly (and literally) declare, “If you can’t understand what we mean, you soon will.”  This promise seems to stretch on forever, though, as just when you think you have a grasp on the band’s sound, it slips away in another change of time or feel of the song, however, this not to say that Without Waves doesn’t lay down plenty of good hooks and sustained grooves.  No, quite the opposite, actually.  “The Entheogen” is dripping with them, however, it is in the band’s ability to “throw you a curve ball” every so often that makes this pointed E.P. so amazing and mind-blowing.

For those not familiar, an “entheogen” is a chemical substance derived from plants and ingested to produce an altered state of consciousness for religious or spiritual purposes, and using this moniker for not only the E.P., but also the first, long-and-winding single was very apropos.  “The Entheogen” is ten minutes worth of mind-bending stops and starts in the beginning of the track, with blast beats, screaming vocals and guitars, and thoroughly out-of-this-world changes…but almost as if the band itself suddenly had begun to feel the effects of a mind-altering substance, the arrangement moves into the surreal, and at times, even the beautiful.  “The Entheogen” ebbs and flows, nearly relaxes fully, then quickly builds to critical mass, releasing with an “’Exorcist’s ‘Tubular Bells’-meets-Tool-infused-with-Between The Buried and Me” like orgasm of unorthodox rhythm, crunching distortion, and tormented screaming….and that’s just the first track!  The second original composition, “Blood and Rust”, has an amazing head-nod effect to it, as the heavy, spacey riffs and rhythms swing and sway like a pendulum, and the chilling vocals over the back-and-forth are quite reminiscent of early Chevelle.  Closing out the E.P., Without Waves decided to pay homage to some local industrial legends by covering Ministry’s “TV II”, and the choice of the song seems to fit perfectly with the band’s sound, as “TV II” changes feels back and forth from complete metal assault to dreamscapes of the surreal.  All in all, Without Waves did a masterful job on this E.P., although I just wish there was more of this “Entheogen” to ingest.  Damn come downs…

Be sure to check out Without Waves’ “Blood and Rust” on our Rock in Chicago 2013 Listener’s Choice podcast!

And also, be sure to visit the band at their websites: