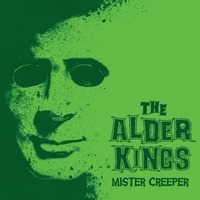 Before I begin, let it be known that the first time I saw The Alder Kings live, I was absolutely and unambiguously blown away by their set.  The light show, the slightly-scary green masks coupled with the all black garb, the lack of any talking from the band members save through the use of a sampler…nothing but excellently presented original horror surf rock and rockabilly, with some covers of legends such as Dick Dale and The Ventures sprinkled in for familiarity and homage, to boot.  The guitarist makes his gorgeous, pin-striped Gretsch growl, scream, and wail as the rhythm section brilliantly lays down the back beats, and all of it is presented in a wonderfully entertaining and engagingly fun stage show.  To say that I was instantly impressed would be a bold-faced understatement, and I can clearly recall immediately running to their merch table to purchase a copy of their first C.D. (2011’s “Who Goes There?”), t-shirt, button, and sticker.  However, the next day, I popped “Who Goes There?” into my C.D. player, and honestly, I must admit, I can also clearly recall a lot of the same feelings then that I had upon recently listening to the trio’s latest release, late 2013’s “Mister Creeper”….It is because of this nagging déjà vu that I felt this piece must be written honestly…

With that being said, The Alder Kings’ “Mister Creeper” is an E.P. that spans five tracks, but it requires no more than ten minutes and fifteen seconds to listen to the whole enchilada.  Now, I understand that this is an E.P., but that is still incredibly short.  Not one of the tracks is longer than two minutes and thirty-seven seconds in length.  Moreover, when you combine this knowledge with the fact that 2011’s “Who Goes There?” is a mere thirteen minutes and thirty-five seconds over six tracks, you realize that over a two year period, The Alder Kings have released a grand total of a mere twenty-three minutes and fifty-five seconds worth of music.  To be blunt, this is not nearly enough to quench my thirst for The Alder Kings and their fantastically original take on the genres of surf rock and rockabilly.  I truly would not be opposed to a couple of the cover tracks that the band is adept at performing making appearances on their recorded works, as it would not only lengthen the releases, but it would also provide an opportunity for the group’s highly talented guitarist to show off his chops a bit more than he seems to do with their original works.  This is not to say that he does not show these off on the release at all, though, as the track “Midnight Hotrod Hellbound Devil Train to Memphis” on “Creeper” is a nice display of the guitarist’s expertise, but I cannot help feeling a bit let down, as none of the other tracks on the release seem to display the same virtuosity as shown on “Devil Train” (nor as in their live sets, either).  I have seen the guitarist with my own eyes and heard him with my own ears…the man can flat out lay it down, and his work on solos is dazzling.  Why more of this is not captured on “Mister Creeper” is a complete mystery to me, and I hope their next release contains more of the monstrous and beastly fret work that I’ve seen The Alder Kings perform live, and if it takes including some covers by the greats of their genres to accomplish this aim, then I say so be it.  I can never get enough of their awesome sets, and that includes the covers they drop in.  Conclusively, I fully support The Alder Kings, but I feel that I would be doing them a disservice if I were not to bring up some of these points, as they have been gnawing at my brain for quite some time, anyway.  I look forward to seeing them live again soon, and I extremely suggest that anyone who enjoys an entertaining rock n’ roll show go do the same, as you will NOT be disappointed in the very slightest.  However, I unfortunately cannot honestly say the same for their as-yet recorded works, and I hope more than anyone in Chicago that that changes with their next effort.

To check out The Alder Kings and their upcoming live schedule, be sure to visit them at: