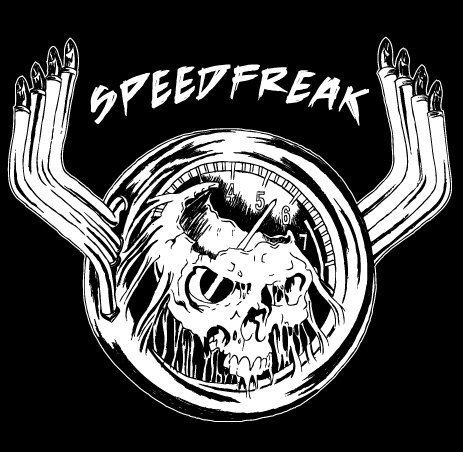 Sticking to your guns can be a bold choice in this day and age.  In a world that changes things as fast as it churns them out, staying the course can be a risky proposition.  For local heavy rock foursome Speedfreak, the risk is worth the reward.  On their debut album, “Loaded”, Speedfreak made no bones about what their message is as a band, slinging out numerous songs about fast cars, faster women, and copious amounts of references to drinking and drugging.  On 2013’s new release, “Baptized in Gasoline”, the Chicago quartet once again serves up a surly, swaggering helping of new riffage.  Although short on content (four songs, and I’m told that there is a surprise bonus track that will be included once it’s released bringing the total to five), Speedfreak is never short on sweet solos, lyrics about driving fast (and screwing while doing it), and toungue-in-cheek rock n’ roll.

Starting off with the title track, “Baptized in Gasoline”, Speedfreak immediately hits you with what they are about.  The vocals on the final cut seem to be a little off from the rhythm of the rest of the band, but in all fairness, I think this was done on purpose, as to add to the overall filthy feel of the song itself.  Moving along, “Man with the Golden Arm” and “Wicked Man” are as solid as the chromed steel on a ’72 Impala SS, but saving the best for last, Speedfreak closes out the release with “Full Throttle”, a rip-roaring rock anthem with metal leanings that loudly declares, “We’re gonna run it to the red line!”  Indeed.  While the quantity of songs on the album was a slight disappointment, the quality is pretty damn good, and the production is top-notch, sounding fantastic when turned up loud in your car (an important quality especially when you choose automobile imagery in your lyrics, artwork, and overall band theme).  All in all, “Baptized in Gasoline” is another fine release from the leather-clad, beer-swilling boys that call themselves Speedfreak!

Don’t forget to catch Speedfreak tonight at Cobra Lounge (235 N. Ashland, Chicago, IL) along with Beyond De-th, Taken by the Sun, and Wet the Steel as they all play live and celebrate the release of “Baptized in Gasoline”!!!  Here’s the link to the event page on Facebook and the subsequent flyer.  We all hope to see you out there! 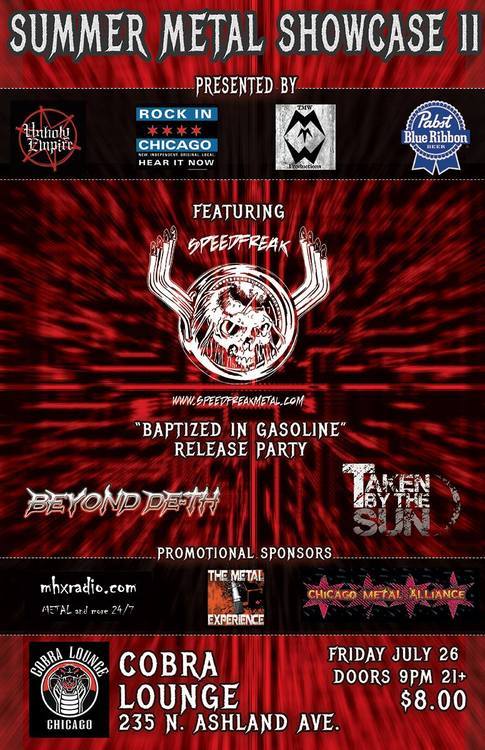 You can catch up with Speedfreak and all their music and happenings here: