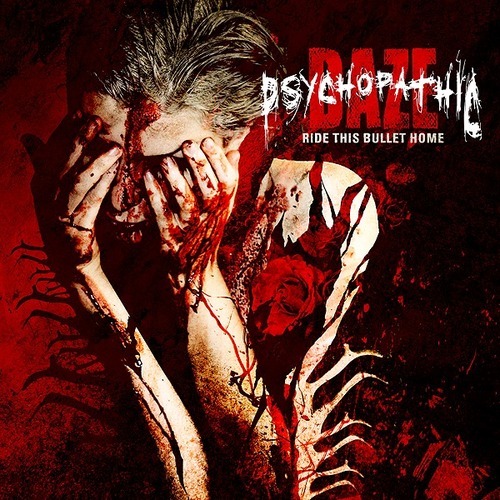 Recorded in California at the studios owned by the now infamous Tim Lambesis, of As I Lay Dying fame, the latest four track E.P. from Chicago’s Psychopathic Daze, “Ride This Bullet Home”, has all the hallmarks of an E.P. from a band that is in transition.  Almost immediately after I conducted an interview with the band last year, lineup changes occurred, and yet the band managed to soldier on and still drive half way across the country to record their latest work, new members to still be broken into the band or not.  This was a courageous decision, and one that resulted in an E.P. that is loud, raucous, and no-frills…just as one would come to expect from Psychopathic Daze.

Starting the E.P. off on a fine note with the title track, “Ride This Bullet Home”, Psychopathic Daze belts out an electrifying track much in the radio-friendly metal style of Atreyu or Five Finger Death Punch, with lots of rhythmic riffs and tightly-timed composition.  Moving into “Wicked Hour”, the band experiments with some keyboard support, and it works quite well, lending more depth to an already complex song. “Seven” seemed to lack anything that made me want to root and rave, however, the final track, “Moment of Clarity” is the E.P.’s finest achievement.  With excellent production and composure, the conclusion to “Ride This Bullet Home” is a wickedly well-written tune that holds much promise for the future of the band.  Psychopathic Daze’ latest E.P. is ambitious and transitional, heavy and measured, propitious and professionally viable.  In other words, grab it, listen to it, and keep an eye on Psychopathic Daze, for I predict further good things from them quite soon, indeed.

To check out Psychopathic Daze further, give their material a listen, and check up on upcoming show dates, be sure to visit them at: