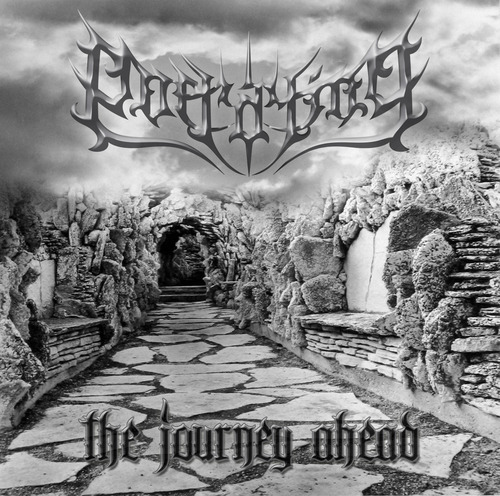 Striking out on one’s own can be a necessary and cathartic experience at times.  Recently, Johnny Dove decided he needed just such an emprise, leaving the security of his place in a well-established and respected local band to concentrate fully on his own, one-man project, everdying.  Six months sans Withering Soul, Dove’s everdying has released “The Journey Ahead”, and into its six tracks (five original compositions and one cover), it is easy to tell that Dove has poured his hard work, heart, and soul.  Integrating elements of technical death with classic black metal and acoustic forays, everdying’s “The Journey Ahead” is a welcomed artistic break from the usual din of Chicago metal, to put it frankly, and I’m eager to see just how far Mr. Dove is willing to take his personally imperative pet project here in the near future.

Starting “The Journey Ahead” right off with blackened melodic death, “quondam echoes” is a no frills, straight-ahead banger that begs listening to and dissolves nicely into “arizona rain”, the lone acoustic instrumental of the effort.  Not to be mistaken for being too soft, though, everdying moves directly back into the blast-beat madness with “i will end you”, an expletive-riddled tirade of anger, anguish, and provocation.  Ultimately, though, “i will end you” is only the set-up jab, to borrow a boxing phrase, as the E.P.’s killer right hook is definitely the next track, “lunar aura”.  Originally released on 2009’s “December’s Rainy Day”, Dove has reworked it for the new release, and its powerfully dynamic hooks are undeniable, with spastic ups, introspective downs, and even an acoustic interlude for a bit of stony satisfaction.  Closing out with the title track, and then finally a blackened/power metaled version of In Flames’ “World Within the Margins”, everdying’s “The Journey Ahead” is much more than the sum of its parts…it is a release that is as refreshing as it is brutal, and as comforting as it is cacophonous.  Keep everdying on your radar, folks, and your inner metal head just might thank me some day.

To check out “The Journey Ahead” by everdying, just press play below!

Also, don’t forget to visit everdying on the web at: