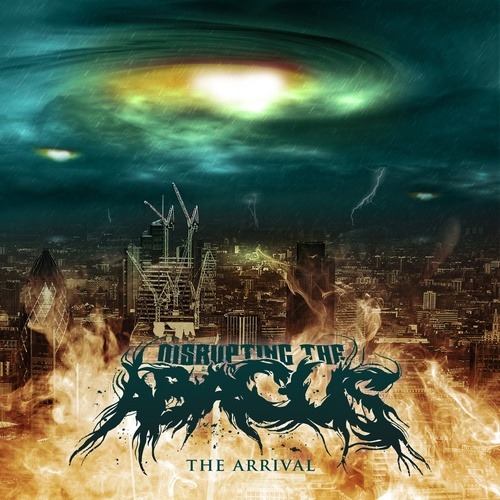 Using the word “core”, attached to another word, to describe yourself as a metal band can always be a risky proposition.  With the exception of “grindcore”, most metal heads generally approach bands that use the “core” suffix with a modicum of reservation.  However, in the case of south side Chicago’s Disrupting the Abacus, a self-proclaimed “deathcore” five piece, I must urge my metal brothers and sisters to not be afraid, and to give the band’s latest full-length release, “The Arrival”, a very thorough listen.  Mixing elements of electronic, rhythmic keys, drums, and effects with absolutely brutal and naturally technical death metal, Disrupting the Abacus’ January 2014 release induces as much hypnotic head-nodding as it does deep-spinal head-banging.  “Deathcore” may be a controversial choice by the band to describe itself, but ultimately, it’s all about the music to your humble critic, and in their case, the music is killer.

“The Arrival” does not take long to get going.  After a short introductory track, Disrupting the Abacus gets viciously beautiful with “Agharta”, and then really kicks it up a notch with “An Archetype”, my personal favorite on the twelve track effort.  Sounding something like a mash-up between Crossbreed and Allegaeon, with hints of Thy Art is Murder, Disrupting the Abacus strike more gold on “The Arrival” with tracks such as “Backglade”, “Throne of Bone”, and “Disrupting the Abacus”, although they certainly slip up a bit with the inclusion of “Currents”.  While I’m not one to write-off a metal band just because their vocalist might dare to sing cleanly, the backing clean vocals on “Currents” are bit too whiny for my taste, but considering that it’s the only track that seemed to get the skip button out of twelve, I’m quite positive in saying that Disrupting the Abacus has written a terrific album.  “The Arrival” is loud, brutal, well-produced, and not to be avoided!

To check out “The Arrival”, just hit play below!

Also, be sure to visit Disrupting the Abacus’ page on Facebook: