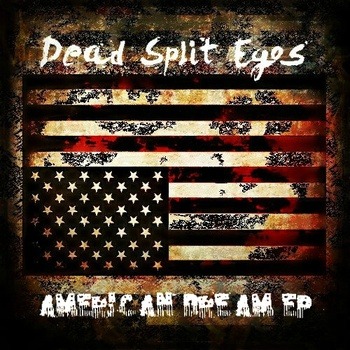 I had the chance to review the Dead Split Egos’ release, “American Dream” (2013).  This E.P. follows the Black Flag, Dead Boys, and Urban Waste style, not as a throwback, but as a continuation of that classic, raucous hardcore punk style. Adding the speed and stripped down guitar riffs that punk rock has evolved over time, like Sick of it All and Pennywise, Dead Split Egos stick to the roots of hardcore punk: play it fast, and play it loud.

Singer and guitarist Nick Toppel’s raw energy reinforces the social and political statement that the album retains throughout all three tracks, reflecting the turmoil of the times and the use of thrash punk as a soapbox to bring focus to changing social views. The lyrics both satire and comment on the state of the modern world from the youth perspective. Building poetically to the final verse of last track, “The American Dream is Dead”, which then turns to the listener and offers a counteractive alternative to the perspective described. The music explores a range of heavy rock riffs and dramatic breakdowns, matching the high intensity of vocal delivery with every step. The whole E.P. has a consistent flow as the drummer, Dennis Toppel, drives the tempo with rock steady fundamentals, and bassist Brett Sullivan’s thrashy, low end rhythms.  All in all, Dead Split Egos’ “American Dream” is a high energy, hard-hitting combination of thrash and politics that brings vintage hardcore punk to a new generation.  While sticking to their roots the Dead Split Egos keep them well-tended, remembering that they have always been a part of punk rock and alive.

Also, be sure to visit Dead Split Egos at their Facebook page: