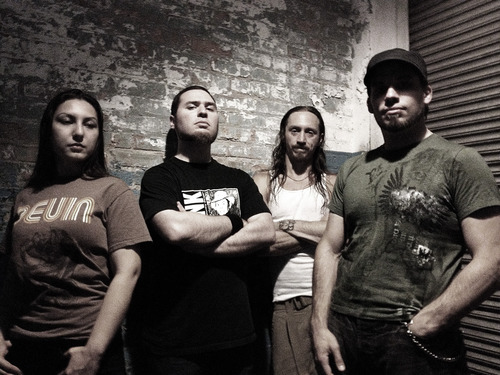 Since Thrash’s breakthrough as the first metal subgenre du jour in the late eighties with the big four —Metallica, Megadeth, Slayer, Anthrax….and Testament, who need to be the big 5th in this writer’s humble opinion— it help spawn many different subgenres we have today, beginning with death metal, through black metal, djent, the much-maligned metalcore, to the current crop of three-hyphen-swiss-army multi-sub-genres that seem to proliferate everything under the metal umbrella today.

Trials eschews the modern multi-name approach, their sound is a current day take of the original formula, Solid songwriting with tight thrash riffs and strong hooks. There is a bit of progressive element to the sound, it isn’t gratuitous, as it is more of a byproduct of four really tight and competent musicians being able to turn collectively on a dime.

This is a band you remember the day after the show. You hum the melodies in your head at work. Mark Sugar’s vocal delivery and rhythm guitar playing is intense, both aspects at times reminiscent of Page Hamilton of Helmet, and a bit of Devin Townsend.
Lead guitarist Ryan Buchert adds and accents, the lead work is spot on, Sugar and Bruchert pull off tasteful harmony work you’d hear from classic Thin Lizzy. Bassist Usha Rajbandari lays the bass grooves down with an adept sense of counterpoint and melodicism. Adam Kopecky’s drumming propels the beat while creating some interesting undercurrents with different accents and textures.

Trials performing This is Starvation at the Double Door in Chicago

Following is an interview with Mark, Ryan, Usha, and Adam, to get a sense of what Trials is all about.

RIC: How did the band come together?

Mark: We basically formed out of another band that broke up, which included myself, our original drummer Sasha Horn, and one other guy. We kind of knew Usha from around town, and she joined that band just in time for us to split up. At that point we started over, ditched the other guy, changed the band name and did a 3-song demo.

Over time, the lineup has gone through some growing pains. Things went downhill with Sasha pretty quickly, so we parted ways with him and got Adam in the band, which worked out awesome. More recently, our original guitar player was relieved of his duties, and Ryan Bruchert stepped in admirably and raised the bar. I think every band goes through that process of finding out who’s on the same page musically and who’s a good fit personality-wise. We just happened to go through it AFTER we had an album out.

RIC: Its great to hear a band that takes the genre of thrash and building upon it with additional influences, and a really strong, melodic sensibility. tell us about what you draw your inspirations from.

Adam: I’ve tried to take a little inspiration from every genre. The high-school days were all metal, all the time, feeding off the many tasty examples set forth by people like Gene Hoglan, Nick Barker, Frost, Hellhammer, Trym, etc….let’s not forget Tomas Haake! Since then, my appreciation for other styles has grown, becoming aware of the benefits of tasteful subtleties.

Usha: As a player, I’m more influenced by classic rock, pop, and punk. Those genres have a lot of walking bass lines and fills that bridge gaps and hold together transitional parts. Those ideas are fairly prevalent in our music, especially the followup to “Witness” that we’re working on now.

Ryan:  I draw inspirations from some of deep rooted sources, but funny thing about joining Trials.  No matter how much experience you have or think you have as a musician, being exposed to new blood, vibe, attitude, and approach to music can veer you into a different direction as a player and as a musician.  Upon my acclimation into the band, I wanted to try my best in suiting their sound that was already established, and in a way try to adapt my playing as well.  After gaining insight how the band functioned first hand and the songwriting process, mental processes, etc., I feel as if I adopted a new influence and have a new vigor towards what I personally would like to write and contribute towards what Trials is accomplishing now.

RIC: Lets talk about Witness to the Downfall, there’s some really heavy material with the lyrics on the album – can you tell us about the subject matter in the songs? Were there any life experiences that influenced the lyrics?

Mark: Yeah, those lyrics are definitely reality-based. To make a long story short, I went through a lot of shit leading up to “Witness”. It was a stretch of time where a lot of ongoing issues finally came to the surface – family things, belief (or lack thereof), personal goals, etc – and had to be resolved one way or another. I think the flow of the record kind of shows that progression, the first few songs are pretty agitated, and by the end of the album there is some resolution. Interestingly, I didn’t realize any of that at the time, and only noticed it while thinking about it to answer this question!

RIC: We want to get a sense of whats goin in inside of your heads, musically Tell us whats in your playlists at the moment:

Adam: My tastes in music are more spastic than a pregnant woman’s mood swings. I’ll go from Dodheimsgard to Grizzly Bear in the time it takes to listen to both albums, then kick back to the soundtrack to Final Fantasy 9 or Diablo, which I must add, is some fantastic acoustic work. The core of my musical interests have always included bands like Uriah Heep and Frank Zappa, Boston (first album only), and other classics which I was practically raised on, having parents who thoroughly enjoyed music. Once I started digging the metal, the trifecta of Iron Maiden, Megadeth, and Metallica pretty much absorbed every moment. It wasn’t until I discovered Deicide that things started getting heavier, and then it was a game of acquiring the most furious music I could. I’ve always been fairly picky with what I listen to, though there’s really no pattern other than what I’d consider interesting. Originality is a big part of that, which is possibly why I find myself currently listening to stuff like Yeasayer. Teenage me would never approve, but screw that punk.

Ryan: I’ve been personally in weird moods lately when it comes to a playlist.  A good chunk of my listening has beend dedicated to soundtracks including Hans Zimmer (Inception), Thomas Newman (Wall-E); Garage A Trois, Oingo Boingo, Devin Townsend, Gridlock, They Might Be Giants, and Type O Negative season is coming up.

Mark: Over the past few months, I’ve been cranking a lot of Immolation, Night Flight Orchestra, King Crimson, and Paradise Lost. Recent albums by Kreator and Rush were both pretty cool. I’ve also rediscovered Queensryche – their current legal drama reminded me that they exist, and I’d forgotten how much they ruled when I was a kid. And like Ryan said, it’s definitely Type O season.

RIC: What are the plans for this coming year? Tours? Shows? More recording?

Ryan: From what I understand, we have agreed to become a collective recluse as a band and focus on recording/finalizing this album during the winter months.  Those of us with the proper genes will hibernate and grow our winter beards whilst we hibernate and track during these colder days.  Being the frosh, I can’t wait to play out some more and break in these new pants I’ve filled in Trials.  I am stoked to contribute as this record begins to wrap up.

Mark: This whole “getting a new guitar player” thing set us back a bit, but Ryan’s input on the album was much needed, so it was totally worth the wait. We’re hoping to have the album out by the spring, ideally, and then some kind of tour after that.

Adam: Once the tracking is done and our fate is in the hands of our mix engineer, we will start developing new songs. I’m sure we’re all eager to get writing as a band again.

RIC: Tell us about some of your favorite shows – who have you played with, what venues?

Mark: My favorite show we’ve ever done was the other night (9/21) at the Cobra Lounge, at the Without Waves benefit. Our current lineup sounds really good, the newer material went over really well, and the crowd was definitely feeling what we had to say. I must say though, playing at the Metro back in early 2011 was pretty cool. That club is legendary, but not very metal-friendly, and I never thought we’d play there.

Adam: My top experience in that regard would be when we played the Metro, which also happened to be my first visit to the place. That’s not to say it was our best performance, which may well have been last night (9/21) at the Cobra Lounge.

Ryan: Amazing vibes at that show, we played well (so we were told), and the most solid sense of community I’ve felt in any music scene in a long time, if not ever. Three of the four dudes in Without Waves suffered an apartment fire, and the whole purpose of this show was a benefit to raise money and help them recover their losses.  I don’t come across many situations where such an excellent time could also serve to benefit friends of ours at the same time.

RIC: Are there any other bands in Chicago that you want to recommend or give a shout out to?

Adam: Without Waves is a band we play with often, who are both tightly professional and easy to get along with. Another band worth mentioning is Unvisioned, who are not based out of the city itself but are a good group just the same. If you’re not into heavy metal but enjoy good live music, check out Oblio and Arrow; an unclassifiable sound with good vibes. They’ve got a strong percussive element derived from ethnic influences and an array of musicians with styles which blend well.

Usha: Spare Parts, our friends in Jar’d Loose who put out their first release this year, and Wounds (formerly Wounds of Ruin) who are back together this year after a few years on hiatus.

http://trials.bandcamp.com
http://www.facebook.com/trialsmusic
http://www.youtube.com/trialsmusic
Trials is currently working on their follow-up to Witness to the Downfall.
Trials’ This is Starvation is featured on the September 2012 Podcast