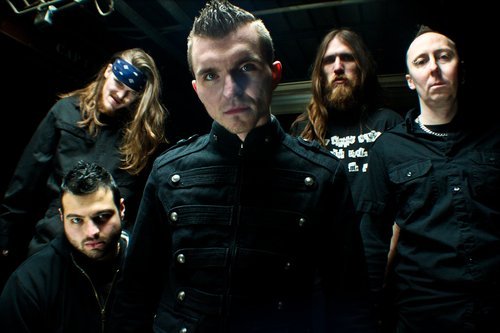 To succeed in the music business, bands need passion and endurance.  Possessing the wherewithal to persevere through the mud and muck of endless practices and composing sessions, cramped vehicles, and years of lugging around heavy equipment to shows way out in Never Never Land takes a certain willingness and sense of commitment.  Psychopathic Daze is willing to put in the time, apparently.  Comprised of Mike “Fitz” Fitzgerald (rhythm guitar), Kyle Meiser (bass), Ryan Kinsella (drums), Ken Morahan (vocals), and Frank Adamo (lead guitar), Psychopathic Daze has no qualms with taking their time to make sure that the recipe is right. “The band started when Mike put out an ad for members to start a band.  Ken and Ryan immediately responded, and ex-bassist Rich joined the band.  After playing a few shows live, ex-guitarist Dustin filled the second guitar slot.  After about a year, Rich decided to part ways from the band, and Kyle was quickly recruited.  After about another year of performing, Dustin was starting a family and decided to part ways, as well.  Frank was quickly recruited, and the lineup has remained the same since,” explains the band (P.D., in a show of solidarity, decided to answer as band).  By my count, that’s four years, and two with the current lineup; that’s a lot of practices, a lot of cramped vehicles, and a lot of heavy lifting.  In other words, that’s a lot of commitment.

While Psychopathic Daze has taken their time to make sure that the lineup is solid, they also take their time when it comes to songwriting.  “Songwriting comes in many forms, however, for our band we find that bringing in a guitar riff to practice to jam out on always works best.  Sometimes one of the guitarists will have multiple riffs that they think would fit together, but the structure of the song is usually created in rehearsal.  We feel that a song is ready to play live when we feel good about the song and when we all get tight enough, if that makes any sense.  We’ve learned that a song is never really finished.  There are always little tweaks [that can be] made even after it’s recorded on an album,” says P.D.  With an approach like this, Psychopathic Daze have managed to truly impress me with a particular song named “My Black Dahlia” from their self-titled debut album.  When I asked them about the song and the sonic trip that it takes the listener on, they replied, “That song was actually on the back-burner for quite some time because we couldn’t figure out a way to complete it to our satisfaction until we were about one month from recording it for our full-length….We have gotten a surprising response about “My Black Dahlia”, similar to yours, and we actually do plan to eventually have another song that resembles that “trip” that it takes you on.”  Even when discussing a current, recorded piece, the band still mentions the time and care they put into the process of songwriting.

It’s almost as if the band can’t hide their desire and determination not only to write good music, but also to connect with their listeners.  I asked the band if they had any “message” in their music, and Ken’s reply was, “The message is whatever you take from the song.  Whether its anger, rage, hate, love or sadness, the message is whatever connects with you.  I put meaning and stories from my personal life into the songs but I leave room for interpretation because what I might take from the song may be entirely different than what the listener takes from it.”  That’s quite a seasoned and experience-laden response, and it certainly displays that the band understands that they’re making music not only for their own satisfaction, but also for others.  When asked what makes them tick, their response only further strengthens this point:  “The passion of writing music and being able to share our experiences and thoughts through the art of music.”  Such a brilliant and eloquent statement, and I can’t help but think that many other, unsigned bands need to take a page out of Psychopathic Daze’ book, if only because it might aide them in their quest to succeed.

Meanwhile, though, Psychopathic Daze are concentrating on building their own success.  When I asked the band what the future holds, they gave me a response that speaks for itself:  “We actually plan to write music for the next album while continuing to perform live for our fans.  On November 9th, we’re performing with Lamb of God, In Flames and Hatebreed at the Rave (in Milwaukee).  We are super-pumped for that, because we know it will be a really good turn-out.  We have a tour booked for January with the mission of recording our next E.P. in California with Daniel Castleman (producer and mixer who has worked with many bands including As I Lay Dying, Winds of Plague, and Austrian Death Machine) and possibly Tim Lambesis (lead singer of As I Lay Dying) at Lambesis Studios.  Again, our main goal is to record the E.P., so we only have two shows booked for the trip, first at Hooligan’s in Oklahoma and then at the Jumping Turtle in California.  In the end, the sky is the limit.  We love what we do and love the fans that are behind us, and we can’t wait to see the future [and what it holds].  We all have big plans for the band and aren’t afraid to dream big, then to reach out and grab those dreams.  Stick with us because it’s going to be one hell of a ride!”…I honestly can’t think of better words to close out this interview with then what P.D. just dropped on us all, so I think I’ll just shut up after wishing them good luck and stating that I plan to stick with Psychopathic Daze and follow them to glory!  Onward and upward, boys!

Psychopathic Daze is performing with Lamb of God, In Flames, and Hatebreed at the Rave in Milwaukee, November 9. You can get tickets here.