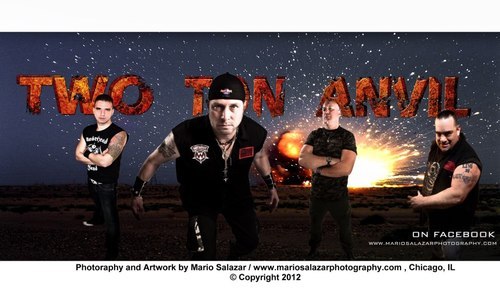 Dark Star recording artist Two Ton Anvil is lead and fronted by vocalist/guitarist founding member Reed McCallister. Reed formed TWO TON ANVIL in summer of 2008. With talent and endless creativity to deliver, the Two Ton Anvil project is some of the heaviest and marketable music that Reed has ever created. Reed completed his vision by adding bassist Glenn Christon, and guitarist Steve LaRocco, and monster drummer known as ‘Vulgar’ Vic Pedraza. Combining several metal genres like mid tempo heavy groove with some fast metal there’s no question that tunes like “Victims,” “Ballbreaker,” and “Timebomb” are catchy tunes that keep you coming back for more. Maybe you want the speed of “Murder Cage” or the melodies of “Reach.” Whatever type of metal you’re looking for; TWO TON ANVIL has it.

The big production of Two Ton Anvil’s material proves there is no lack of engineering and production expertise on this project. The band has a meaty mind crushing sound with huge vocals and catchy melodies that are guaranteed to hold your attention and thump through your speakers while tapping your feet and banging your head! The band has consistently held multiple spots in the top ten lists of various websites claiming the 1 spot in several categories. World released on www.indiestop10.com as featured artists in an interview with host Mike Cameo. Listen to how many months 2008-2012 that TWO TON ANVIL has been showcased on Indies Top 10 podcasts and over dozens of internet sites on the web.

Not only has Two Ton Anvil been slowly making a name for themselves in local Chicago music scene but also have shared the stage with national acts such as Five Finger Death Punch, Bury your Dead, In this Moment, Another Black Day, Kittie, Dirge Within, Texas Hippie Coalition, etc. With both the debut self titled CD and the recently released “COMING HOME” CD the band has enjoyed success on their first world television premiered video “Corruption” also releasing the “Corruption” single on national radio airwaves – Two Ton Anvil’s gearing up for a full out touring schedule with coast to coast scheduling in the works. With Dark Star Records behind the group, good things are certain to happen for this hard working group of dedicated musicians.

How was the band formed?

Members from other bands came together to form Two Ton Anvil. The bands first show was at the House of Blues supporting Five Finger Death Punch in the fall of ‘08. The idea was to have this metal machine at our disposal when we had original shows to play while we were in our other cover bands. TWO TON ANVIL soon became our primary focus. Some of the original members went back to their other bands, some ended up moving away, and some burned out while Reed persevered and remains the backbone of the project. Reed writes the material and is the lead vocalist and front man for the project so no matter the lineup changes the sound remains true to what TWO TON ANVIL fans worldwide can expect.

Where did the band name come from?

Reed started the band with another founding member that has since left – therefore the “TWO.” “TON” came from the fact the project is heavy and “ANVIL” is well…METAL, right? Put it together and you have TWO TON ANVIL – a name that is very fitting for this type of material yet doesn’t paint us into a corner to progress and evolve for the good of the project.

What was the motivation for forming this band?

Like I stated above, musicians from other projects came together to form a unique heavy band for the opportunity to play large venues and festivals while remaining in other projects. That mentality has gone away as each member is now exclusively only in TWO TON ANVIL – there cannot be any scheduling conflicts or priority conflicts – TWO TON ANVIL is #1 priority for all members or you’re simply NOT a member!

What are your major influences?

There are so many to mention…but the thought process is to stick to successful songwriting basics – music that appeals to the vast majority of fans and is marketable and radio friendly while still being heavy and intense. NOT the cookie monster style vocals but rather raspy verses with huge melodic choruses

What plans do you have in the future?

While the second release came out 9/11 last year as a tribute to our troops in all wars past and present we are almost halfway done writing for the third release. “Ballbreaker” “Loyalty” “Victory” and “Timebomb” have all enjoyed FM radio airplay and the goal is to have our music on every FM metal station in the world and we’re well on our way via internet stations, satellite, Pandora, and Slacker. Bigger better shows nationwide and no stopping until we can sell out arenas!

How would you describe yourself to someone that has never heard you guys?

We are similar to Godsmack/BLS/5FDP/Disturbed, but with our own thing going on. Very energetic professional live show – we really bring the music to life on stage…crowd interaction and entertaining!

What has been your favorite show so far?

It’s great to play in front of thousands and the larger stages so festivals, House of Blues, Tailgaters with national acts are a blast! We have a lot of big shows coming up so I might have a different answer by the end of the year!

Are there any funny stories from one of your shows that you’ll never forget?

All ages shows and out of state shows get wild! Kids coming up and asking you to sign stuff and treat you like royalty. Nothing really freaky or weird….YET!

Tell us about some of your next shows

Too many to list…check out on our Facebook page and Reverbnation page – all of them are listed there I believe. We have Metal Militia coming at the end of April in Chicago @ Elbo Room, Diamond Head @ Reggies, and House of Blues before we head out of state for the festivals…we have shows in Madison WI area and later in Milwaukee area…we are sadly replacing our drummer due to health issues and auditioning now! We are also keeping backup musicians in place.

What’s a little known fact about the band?

If I mentioned it – it wouldn’t be little known would it? Actually our amps go to 11…we don’t keep many secrets tho…

What is your favorite song to play live?

Now this is really tough! The crowd seems to like Victory and Timebomb a lot live due to the energy…I think Turn Up the Bitch is gonna go over really well too!