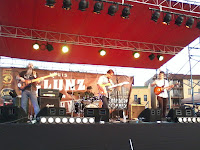 The music portion of Jeff Fest featured some of the hottest local/indie acts around two such as Dot Dot Dot, The Locals, Wishing Well, Root Cause and more on the main stage meanwhile on the acoustic stage artists like Peter Oyloe, Yost Drum Circle, and Tommy Tuesday. Providing the Saturday evening entertainment, the members of Voodoo Kings (http://www.voodookings.com) rocked the main stage with an energetic performance before the headliner Magic Box closed out the night. The crowd enjoyed the unique combination of electric guitar americana/blues rock with intense rhythms and upbeat rhythms as long as songs styled with vivid imagery inside the lyrics. Plus there were times when this band excitedly grooved the stage with a funky vibe that had some dancing along, blogspot readers. For example, listen to Voodoo’s American Lights, a descriptive song about traveling across US amidst thrilling electric rhythms at instrumental bridge meanwhile the song Animal had a fierce growl of electrifying funk rock which will have you feeling that intense guitar vibe. 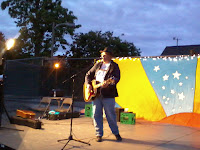 Over at the acoustic stage, SouthSide checked out part of Mike Felten’s (http://www.mikefelten.com) set where he was performing new songs off his upcoming album – AKA Johnny Lunchucket before its official release on August 25. Within a lively Americana folk rock sound, this reviewer enjoyed Mike’s tales about old buildings that were part of Chicago but now torn down (Made In Chicago), the rise and fall of the American car industry and a song titled Too Kind To Hit …just to give you a sample of what to expect from this singer/songwriter. Though having a little microphone problems, the dancing, sword-fighting kids were an added delight to those who attended this performance. Fans can catch this artist along with Hannah Frank and Victor Sanders at Uncommon Ground (Clark St location) on August 25th.

Until next time, support your local scene,
SouthSide