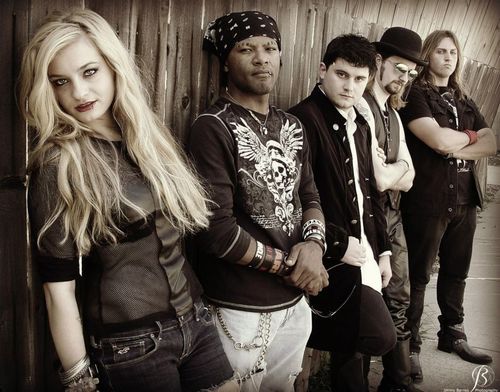 It’s interesting to watch trends and fads go by in the music world. Sounds and looks are developed and hyped by the media and industry through out the years; glam gives way to grunge, which gave way to the new punk and nu metal and on and on to the next new thing.

Stone Cold Outlaw is part of a new crop of young bands that proudly stand with their backs to all of the above, with both middle fingers up in the air, and reveling in the classic, boozed up and dirty hard rock sounds of 80’s LA sunset strip. They do so with a punkish attitude. Their music, certainly groovy and rockin is a great party back drop for Karina’s vocal delivery. Imagine if Gwen Stefani fronted Cocked’ N Loaded-era LA Guns, if White Mystery dropped the garage rock psychedelics, or if Missing Persons came out in the late 80s, and you would have an idea of the Stone Cold Outlaw sound.

The band came together after guitarist Paul Widner was working in other groups and doing auditions. Nothing gelled for him, and he started with Stone Cold Outlaw. Lead vocalist Karina met Paul and joined on vocals the two have been working together as the core of the band for the last year.  “We’re all pretty much inspired by bands from the 80s. Guns ‘N Roses and Aerosmith probably being our biggest influences. We just love music that inspires a good time and basically any aspect of every day life.” Paul quips about the bands core influences,  “personally for me, Appetite For Destruction was IT for me. That album was pretty much what shaped me into who i am today. I’m also a big (Aerosmith) Rocks and Toys In The Attic freak.”

For Karina, she was singing since a young child, growing up in Poland “My mom told me I started singing when I started talking; with me its more vocals of Axl (Rose) and (Steven)Tyler that inspired me.”

In 2012 the band has released a self-titled EP and has been playing steadily around Chicago and the suburbs, opening for bands such as Diemonds, Black Actress, and Wildstreet , and notably performing as their heroes, Guns n’ Roses as a tribute show last Halloween at the Elbo Room.

Stone Cold Outlaw continues to write material for an upcoming full length album, and play shows locally around Chicago. They just released a video single for the tune Excess.

You can catch Stone Cold Outlaw live between beers and shots of Jack Daniels at  Ultra Lounge on Friday, February 1st.