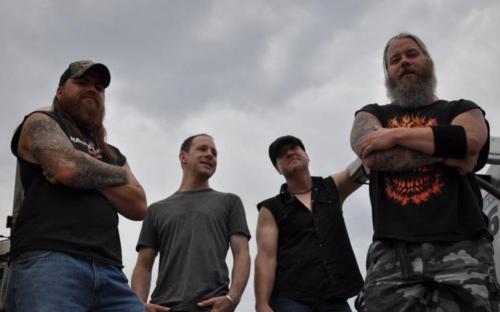 I’m always intrigued with the name a band gives to them selves. There’s usually meaning behind the choice, and can give insight into how a band perceives what they are about, and what they are hoping to convey. Convoy, by definition, is “The art of accompanying or escorting, especially for protective purposes”. Based upon some of the answers they gave, I would say this band couldn’t have picked a better name for them selves.

They describe their music as “Swamp Rock”, and “Southern Rock” I wasn’t sure what to expect. Being that my own Dad grew up in Tennessee, I know all about those wild eyed southern boys.  They can be a crazy bunch. I’ve always said that if all hell breaks loose, I want to be where the southern boys are.  I am a big fan of this type of rock. And let me tell you, I was not disappointed. Bar owners must love these guys. You have to have a drink in hand and you won’t be able to sit still when the music starts. This is everything you could possibly want for a good night out. From the sexy hot blooded lyrics of “I want  some” to the wrenching “River of Sorrow”, Brian Corbin delivers with strong vocals and back up rhythm guitar to John Daniels rocking leads, while Mike Getz on drums and Dan Thompson on bass have you bouncing in your seat with their aggressive bottom end.

RIC: How did the band come together?

BRIAN: Convoy came about by accident. I and Mike Getz were in a cover band called Chrome 7, I called him up one day and asked him if he wanted to be in this project that I wanted to start, and that it was going to be different from anything else we had ever done, and poof that was it.
The line up right now is the original lineup, we have had some changes over the past 2 years, our lead guitar player John Daniel left for a while and we picked up a friend of mine Don Viane. That lasted about a year with him and then I asked my Uncle to come up from Kentucky, he jammed with us for a bit and now here we are right back again full circle with all the original guys.

BRIAN: This is a long list so here we go: Corrosion of Conformity, Black Sabbath, Black Label Society, Pantera, Down, AC/DC, Kiss, Lynard Skynard, Van Halen, Just about all southern rock and anything that rocks

RIC: Who writes the songs?

BRIAN: The songs just come out either when I’m at home on an acoustic or when we practice all together. Someone might start playing a riff and then we stop and look at each other laugh and then try and finish the song.
I usually write most of the music because I want to make sure I can sing and play the music. It’s tough sometimes doing both, Sometimes I stop and think “how in the hell am I singing and playing at the same time”.

RIC: When did you get the itch to play and write music?

BRIAN: At an early age, just feeling music and what it does to you, who wouldn’t want to create their own music?

BRIAN: Redneck Fest 2011, That put us on the map in wisconsin and to a wide range of people. That ignited the flame!!!

RIC: What happens at a live show?

BRIAN: Pure Energy!!! And a Great time!!! If you really want to know who Convoy is, we are some hard working blue collar guys who like to drink beer and jam out with our brothers. We love this band, and we love the fact that we help people get through the day just because they listen to our music. We don’t bullshit around and we are definitely not fake. We tell the truth in our songs and we rock the hell out of any place we play at.

My suggestion to everyone is that you hook up to this Convoy and let these boys escort you into the circle with them,  away from the worries and hassles of the day for just a little while.

Check them out at:

Convoy is Featured on the October 2012 Podcast