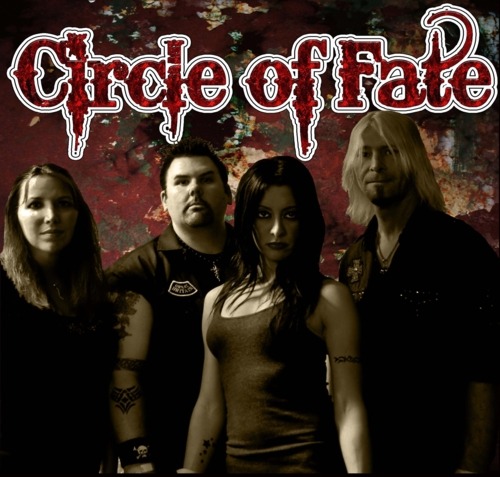 Sometimes, the hardest part of writing an article is figuring out how to begin. I recently had the pleasure of interviewing Circle of Fate. The band currently consists of four members, Danny Charatin handles lead guitar and vocals, Michele Caruso is lead vocalist, Jimi Swanson on bass and Lynn Parkenson on drums.  Where to start? The beginning I suppose would be a good place.

RIC: When did Circle of Fate come together and how? Are all the current members original members or have there been any personnel changes that took place along the way and if so, did it help develop the band to how it sounds today?

Danny: That’s a good question. Michele and I are the original members and formed the band over 14 years ago. At that time the band’s name was CoDM, which stood for Company of Danny and Michele. Since that time we’ve gone through a decent amount of members. It was in 2006 that we decided to change the name when we went through another member change. Circle of Fate sounded like a great name to us. In 2006 we quickly went to work and released our 3nd CD but first as Circle of Fate. The album is titled “Dawn of A New Era” which was fitting to us as we looked at our music with a fresh outlook. I wouldn’t say the different members had to do with the sound as much as Michele and I becoming seasoned with each other in our writing style. We’ve recently added Lynn Parkenson on Drums who brings a nice element to the band being female and slamming the skins like she does and Jimi Swanson on Bass who brings a great presence to the front of the stage.

RIC: Who has influenced you musically?

Danny: Well, as far as influences, I would have to say bands like Iron Maiden, Dream Theater, Rush, Megadeth, Steve Vai, etc. I also like and have been influenced by other styles of music.

Michele: I would have to say I was very influenced by Pat Benetar and Joan Jett. They both have very powerful voices and carry themselves well on stage. I listen to different types of music to get inspiration from.

Lynn: I have a lot of musical influences, but I think the people who still influence me the most are Neil Peart, John Bonham, Bill Ward, and Vinny Appice. I admire these players not only for their amazing skills, but also for their innovations. I am also influenced by my mom who still sings and plays guitar every now and then, and my late grandfather who played guitar and stand up bass.

Jimi: Wow, that’s a big question. I’d have to say I really was into Rush but liked a lot of bands. Classic Rock, Foghat, Zepplin, Aerosmith and Nugent. I love all of the 80’s hair metal stuff but also get into Clapton, Buddy Guy, etc.

As you listen to the music you can hear that this blend of influences has helped Circle of Fate obtain their sound. The rich vocal style of Michele dips from insightful to in your face, don’t mess with me tension, the guitar goes from melodic to gutsy and plays around and with the emotion of the song. The bottom end is tight, Jimi and Lynn are holding it down and filling in the sweet spots with some nice accenting.

RIC: How do the songs come together? Who are the writers in the band?

Danny: Well, Michele and I do all of the writing in the band. As far as how the songs come together that can vary. Most of the time we’ll sit together and Michele will start singing a melody or lyrics that she has and I’ll start to put a riff to it. We usually don’t get a song together in the first sitting. We usually come back to it with fresh ears and piece it together. We don’t like to just throw songs together. Sometimes I’ll come up with riffs and bring them to Michele to add something to it. On a rare occasion I’ll actually write the lyrics to a song along with the music. That is very rare though. Once we feel the song is complete we’ll add a basic Bass line and drum machine so the song has the tempo and style we have in mind for it. Once that is finished we hand it off to the Bassist and Drummer to polish it off. Sometimes when we pre-record and really listen to the song we’ll make subtle changes before we actually record it.

RIC: When did you first realize you wanted to create music?

Danny: I started playing the guitar when I was 11 years old. About 2 years after that I wrote my first song. It was probably the worst song ever written but nonetheless it was my song. I wrote it from how I was feeling inside and it was original. I have been developing my writing style since then and continue to do so on a daily basis. It was from that point on that really made me want to write original music.

Michele: When I was young I always wanted to be a singer. I loved dancing and music in general. As I got older I started to lean more towards being in a band. I had been a back up singer for a while but the lead singer role is what I’ve always truly wanted.

Jimi: I started playing at around 14 years old and about 1 year after that I realized after listening to some of my favorite artists that I wanted to create my own music which also opened the doors for me to learn keyboards and guitar as well.

Lynn: It was at a young age at the very moment I sat behind a drum set. I thought the drums were the coolest instrument and still feel that way. It’s always exciting when the drums kick in. I love working on original projects because it gives me some freedom to try and write unique drum parts

RIC: Describe your style to someone who has never heard the band.

Danny: We would have to say that we are pop rock with metal sensibilities. We have a metal edge to the songs but Michele is absolutely wonderful at writing catchy melodies to the music or from scratch. She is also a very good lyricist. All of our songs have some sort of meaning to them. Each song tells a story and takes you to a certain place if you really listen to it.

RIC: You’ve been together a long time. What was your most memorable gig and why?

Danny: We would have to say Summerfest of 2009. We were in support of Billy Squire. There was a ton of people there and 95 WIIL Rock had the show simulcast on their station. We were actually treated nicely and they really took care of us. It was nice to be treated so professionally. We had a great time and when we finished we went to the stage right across from us and watched Halestorm and Staind play.

RIC: What can someone expect from a Circle of Fate live show?

Danny: We call it exactly that, a show. There are a lot of bands that just stand there and have no pulse at all. We strongly believe in putting on a show so that it’s more like an experience and something you can remember. We believe in moving around and playing to the crowd. Michele especially has an unbelievable stage presence and commanding voice. We also have a merch table that we set up with t-shirts and cd’s available as well as pins and our newest release the Circle of Fate “What If” DVD. We want to make the fans feel like they got more then their money’s worth.

RIC: You’ve been together a long time doing quality material. 14 years of existence for a local band is a great track record considering how many fall apart just when they seem to be getting some momentum. What is the glue that keeps it together?

Danny:   I think the glue that keeps us together is the fact that Michele and I have become best friends first and foremost. No matter if we get in an argument over a song or have a disagreement we always make up. We are both very driven to take our music to the next level. You really have to choose your battles in a band and work as a team or it will all fall apart.

DON’T MISS THEM on June 2nd at Rockin For The Vets at the Sundance Saloon in Waukegan, IL.

Circle of Fate will be appearing on the new SEVEN ON RIDGE show on WJYS on October 26 at 10:30pm. for more information on the show, visit www.sevenonridge.com

Circle of Fate is managed by Diamond Cut Productions.

Circle of Fate is one of the featured guest on the Rock In Chicago Showcase  on Rock Gator Radio, tune in to Rock Gator Radio Monday, April 2 at 8pm CST/ 9pm EST for an exclusive interview and to hear some of their tunes