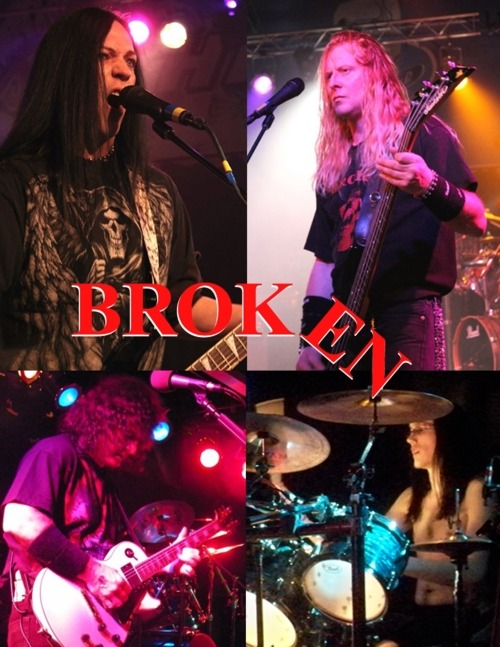 A doll sits in the corner of a dusty attic, its arms and legs pulled askew and cast off by a careless child..Broken.

A strong October wind gusts through a darkened forest, pulling frail limbs from trees in its wake…Broken.

She sits with the razor blade poised above a trembling wrist, her heart and spirit tired and crushed…Broken

The band assembles on stage. The lights and fog lend a surreal effect as they break into song, the heaviness of the music beats within your chest.  The singing begins and you are pulled down into the darkness with them.

“It’s cold and dark, leave me be, I’m all alone, Leave me bleed”  From the CD appropriately title “Darkness Falls” the song “Bleed” among others, speak of the inner darkness that we all have felt at one time or another.  As I read through the song lyrics it is an emotional roller coaster ride. In “Devils Ride” you become the tormentor, In “Bleed”, you share the mind of the victim.  Layered between all these intriguing lyrics are catchy and satisfyingly heavy guitar licks and the aggressive vocal style of Eddy Black.  The CD in itself is a treat, but the live show should not be missed.

I recently had the pleasure of seeing these guys play at the Chicago Loop sportsbar in Streamwood, IL.  Eddy Black handles lead vocal and Guitars, Michael J on Lead and Acoustic Guitars and backing vocals. Boomer on Bass and backing Vocals and Jeremy Bergstrom on drums.

RIC: What dark origins did Broken evolve from?

EDDY BLACK: BROKEN really started with a case of beer and an acoustic guitar. Drinking and having fun making noise. But musical direction quickly started morphing into an original music project, plugged-in, of course. This was probably somewhere in about 2006 when we started messing around with writing a couple original songs to bang around. But the project just never really seemed to get off the ground because we could never find a bass player that seemed to understand where we were trying to go musically. 13 bassists and about 2 years later we finally found Boomer. He just seemed to be the one that saw the direction we were going in. We started picking through some of the songs we had been playing around with and started finalizing the arrangements. I don’t think we were really taking it very seriously at the time, we were just having fun. We all had a lot going on at the time in our personal lives so it was more of an escape. But there was finally some real chemistry in the room with Boomer. In June 2010 we started playing a few local shows here and there, just to get out and have some fun. We were eventually approached by Turkey Vulture Records at a gig and offered a deal, which we ended up taking. I think it was right around that time when we started taking things a bit more seriously. We’ve definitely had our ups and downs in this band. Right after we recorded our album we came to the decision of making a line-up change. We ended up letting our original drummer go. It seemed like we were just going in two different directions and it was causing a lot of tension in the band. We hired our current drummer, Jeremy, as a fill-in until we worked everything out having to do with the line-up change. It ended up that Jeremy was the element that was missing from BROKEN…that missing piece. So we offered him the spot and didn’t look any further…

JEREMY: I started playing drums in 2005. I was influenced by both Joey Jordison of slipknot, and Neil Pert of rush. Aside from that, I’ve wanted to play drums since I was a young lad.

RIC:Who writes the music and these intense lyrics?

BROKEN: Some songs evolve over time and some just happen overnight …or so it seems. For the “Darkness Falls” album most of the ideas were started by Eddy with some lyrics, a vocal melody, and/or a couple guitar riffs. But everything was definitely arranged and added to by the whole band. Everybody really expresses their input and has a role in the process no matter where the idea started from. We like to say that all of the songs are written and arranged by BROKEN. To be honest, there is no set formula that we use for writing; lyrics before music, music before lyrics, an all on the fly musical spill. We use them all. Lately the writing chemistry has definitely changed with the addition of Jeremy on the drums. Honestly, it’s never been better. Everybody is coming up with new riffs and ideas all the time. We’ve had to resort to recording our whole practices on the computer to capture all of the new ideas getting tossed around at any given moment. Before we started recording the practices, somebody would play a riff and we’d say, what was that that? Do that again! The common response became I was just messing around; I don’t remember exactly what I was doing. Now, we have a difficult time making it through our set during practice because we get so side-tracked by all of the cool new riffs everyone has been coming up with. There is no doubt that the new material will be even stronger and a clearer snapshot of the band’s direction and personality…

RIC: Give your readers some insight into what started you in this musical direction?

EDDY BLACK: Music has been around me my whole life. It’s gotten me thru everything, both good and bad. Ever since I can remember I always wanted to write music just because of that. Writing has become my escape from reality. You know, it’s kind of my way of saying things that maybe can’t or shouldn’t be said. It’s my way to release buried emotion and bring it to light, no matter how dark, angry, or against the grain. Its like creating an emotion and wearing it on your sleeve. I’m not sure where I’d be without that freedom.

MICHAEL J: When I was a little kid, I was about 10 years old, I heard Led Zeppelin and Black Sabbath and my whole world turned upside-down. When I was 17 I bought my first guitar..and what a piece of junk that thing was. But I kept playing it. I couldn’t afford lessons so…I taught myself how to play

BOOMER: After numerous tribute bands, FourHorsemen, Battery, High Speed Dirt, Mechanix, etc. It didn’t take long to know you can only get so far playing some else’s music. While learning this lesson I noticed things that I would’ve liked to add to the riffs or subtract some of the riffs from certain songs. This is what made me hungry for a kick ass original band to bring my ideas forward.

JEREMY: I wanted to create/write music since I new what it was basically. I enjoy playing for people and with great musicians.

RIC:Your sound, in your own words?

BROKEN: We are kind of… Old School meets New School… kind of hard rock…kind of heavy metal….There are a lot of different influences in the members of BROKEN and everyone’s influences are different. It’s a collaboration of all of these influences that makes Broken different from everyone else. You can listen to our music and say I hear influences from this artist or that artist but as a whole it doesn’t sound like anybody but BROKEN.

RIC:We always like to hear what was a show that you feel stands out?

MICHAEL J: I think when we played The Rave in Milwaukee Wi. We opened for BLACK LABEL SOCIETY, Children of Bodom, and Clutch …. even though we played the side stage that night …. the crowd was screaming and chanting our name. Some of the other bands and people walking around came in from other areas to see what the hell was going on. It started making us really think that we have to keep doing this because we just may have something here.

EDDY BLACK: We’ve played with Black Label Society, Children of Bodom, & Clutch, Soil, Smile Empty Soul, Earshot, Psycostick, Ventanna, and a ton of other local original bands from Rockford and the Chicago area. Most of them have been memorable for one reason or another. And I honestly think we have  yet to play our most memorable gig. But If I have to answer that, I’d have to agree with Michael and say The Rave…that night was totally bad ass!!!

JEREMY: That would have to be the show we did in February at Penny Road with Psychostick & Ventanna. Psychostick is one of my favorite bands!!! They were the headliner that night, and they had their drums on the stage and everyone playing that night was supposed to play their set on Psychostick’s drum kit…wait! What!?! Their drum kit was way smaller than mine so it forced me to play some stuff a bit differently. But in the end it was absolutely sick!!!

RIC:Tell your readers what they can expect from Broken at a live show?

EDDY BLACK: When you come to a BROKEN show, you can expect to hear some in your face bad ass music, and that you’re going to watch a band that has fun playing together. We try to get people to stand up and get out of their seats and yell and scream. Get involved, and release some of their built up emotion and life’s frustrations. When we connect with the crowd, we just know it. We see it and feel it. I think that’s what keeps us all doing this. We try to make it like a party that everyone is invited to. So if you were unable to make it to the show on that given night, you really missed out on a good time.

We have a really big show coming up on July 14th. We are going to play the mainstage in the Rock’n the Valley Concert (July 13th and 14th) in Pecatonica, IL at the Winnebago Fairgrounds with Skid Row, Warrant, Trixter, The Last Vegas, The Pimps, Broken, Blameshift, Slam Bang, Veilside, and Lynch.