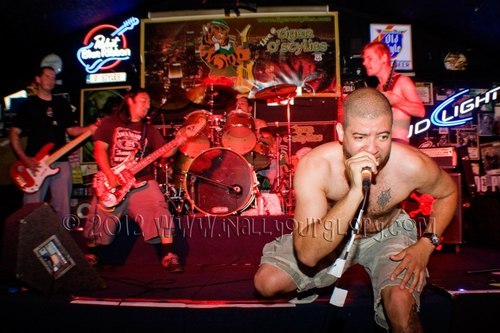 Felony 4 is a punk band. A simple enough statement, but with so many bands proclaiming themselves to be a genre, a sub genre, a micro genre, its enough to make your head spin (ok, I made up the micro-genre thing) But seriously folks, what’s wrong with just being a good old, in your face, irreverent, rowdy punk band? After all, isn’t that what punk music is all about?

I admit that I do love punk music. I love the attitude, the bratty-ness, the, I don’t care what anyone thinks of me, I’m going to say what I think, style of the music. It embodies the restlessness of life, the energy that screams to be released and heard.

I particularly like Felony 4. Most of the bands around here are very serious about what they do. They cultivate and nurture a look and a sound, and that’s cool, you have to pay attention to detail, it’s all in the presentation and you only get one chance to make a first impression.  Felony 4 pretty much kicks all that to the curb. Sure, they would like to “make it” like everyone else, but its not what drives them. So what does? They love to play and they love to have fun and they love to connect with their fans, it’s not that they don’t take their music seriously. Brandun Felony is one of the hardest working supporters of the local music scene. He works tirelessly to promote not only his band, but other bands in the area.  It’s just that they haven’t forgotten what is and should be at the root of playing and writing music. You gotta have fun.

I caught up with 3 of the members as they were getting ready to practice. Their enthusiasm and love of their craft is infectious and I had to write furiously to keep up with the flow.

Rock in Chicago: How would you describe the music and appeal of Felony 4?

Brandun: Most of all, we want our music to be fun, we want people that come to a show to have a blast and we tend to appeal to people that like anything from punk to death metal.

RIC: I would definitely describe your music as punk. Was it your intention to be a punk band?

Brandun: Punk just seems to be what comes out, it’s pretty hardcore. We like to think its good party music, every song tells a story

RIC: How did Felony 4 come together?

Brandun: We actually formed on 9/11/11, we’ve been together a little over a year. I knew Ryan from another band that we had been in, we all hooked up through Craig’s list.

RIC: Who writes the songs?

Brandun: Well, its mainly myself and Eddie, when our singer Milo joined the band, he really added a lot, he writes the lyrics to the songs

RIC: When did you guys get the bug to be a musician?

Brandun: Pretty much from when I was younger, I played bass first and then I got a free guitar so I started to learn to play it, Ive pretty much been self taught, I’ve picked up a lot from different people Ive jammed with over the years.

Ryan: I’ve been playing since I was 15, I loved the awesome energy of Dave Lombardo and knew I wanted to play and blow peoples minds.

Derrik: I thought I wanted to drum, but then I saw Nikki Sixx. I bought a bass guitar from a friend for fifty bucks when I was 18 and pretty much like Brandun, I’m self taught and picked up from friends helping me and showing me stuff over the years.

Brandun: You can always learn something new

RIC: You’ve only been together a year, but I know Felony 4 has been gigging quite extensively. What has been the coolest show you’ve done so far?

Brandun: Well, we always love to play Nanuco’s, we have lots of dedicated fans in the area that come out and it’s always a party. We played the Punk Picnic in Kenosha, there were about 300 people there and it was like a mini-Alpine Valley. That was awesome.

RIC: So what are the future plans and goals of Felony 4?

Brandun: We are hoping to move on to bigger shows, we would love to play the metro. A dream gig would be to open for The Dwarves. Right now we are taking a break from doing a lot of shows since we are in the process of recording a CD, release date is still pending.

So the next time you’re in the mood for a fun night of high-energy music, look up Felony 4 and catch their live show. If you’re lucky, Brandun might even introduce you to the Colonel.
You can catch Felony 4 at: 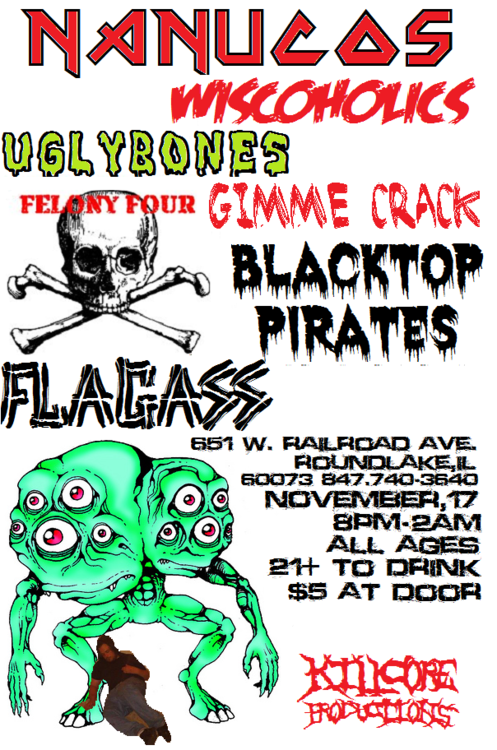