The direction and overall goals of bands can vary wildly in this world, and our local music culture is not exempt from this rule.  Recently, I had the privilege of interviewing Tim Preciado, also known as Scare Crow, the founder and driving force behind Never We See, a Chicago metal outfit with seemingly no set members other than Preciado.  When I asked Tim what some of the topics and emotions that he tries to write about with his music, he unknowingly confirmed this unwritten rule of the music business: “Some bands are political, some write about love, some complain about ‘God’, but since Never We See is a multidirectional band that was created for the intention of mental thought, I will continue to write about topics that remain in the realm of the human psyche.  I would never write directly about hate, but rather the reasons of hate.  For instance, the sixth track (on the self-titled 2011 debut), ‘Man of its Own Kind’ speaks about how man embraces religion and uses it [as an excuse] for the various actions of war, killing, and social segregation.  It is not about hating God, but rather writing about the foolishness of man that follows God, or in other words, it has always been in my belief that the idea of a God was created by man, thus ‘the weakness of the human mind, follows a man of its own kind.’”  Now, while some may say that music isn’t meant to be so serious, music is whatever the artist decides it should be, and Tim confirmed this for me by saying, “I like to reference bands like Led Zeppelin, Pink Floyd, and pretty much anything in the 70’s-80’s because in that era, music was viewed as entertainment and enjoyment, or in other words, art.  The pop culture, as beautiful as it may be, has completely changed the outline as to how music is ‘viewed’ and what it’s ‘supposed to be’. Needless to say, I intend on embracing the ‘I will write as I see fit’ attitude, and with that mindset, I intend to be the artist that I am.”  Simply put, this kind of “Fuck you, I shall write the way I want to write” attitude comes through in every Never We See recording and performance, and that’s a good thing.  It allows the work and the art to stand alone for itself, and when the work and the art is as strong as Never We See’s, then let the attitude remain forever.

Thus far, Never We See has released one full length album, their 2011 self-titled release, and for the recording process, Preciado handled most of the instrument writing and recording all on his own, including drums, guitars (lead and rhythm), bass, and vocals.  Yet while Never We See may mostly be a “one man show” during recording, Preciado still needs to ask the assistance of other musicians to put on live shows, and some of his most recent live helpers include “Mr. Green” on bass, and the very busy and very talented Garry Naples (of November’s Doom, Kastasyde, and Without Waves, among others) on drums.  However, the composition of almost all material for the band is conceived inside the mind of Preciado, including all of the new material that he has been laying down slowly and carefully during 2013, and that’s just the way he prefers it, frankly.  “ I will be writing all of the music on this album yet again, however, I do have the pleasure of working with Mike Walsh, a.k.a “Blade”, and he will not only be co-producing with me, but he will be writing some of the sickest lead guitar I have ever heard.  He is the guru of guitar playing, and not only does he understand what it takes to write flawless music, I am giving him complete control over the leads he chooses to write.  Garry is a great drummer, but since he is in so many projects as of now, I want Never We See to have that specific sound that it has, and adding his flavor into the record would change its sound far too drastically for my taste,” states Scare Crow, and while it’s not hard to tell that he is incredibly comfortable in his own element (even if that means having to say “No,” to having other artists participate in the writing process other than those that he believes will help him craft his own sound properly), even artists with such talent and boundless worth ethic like Preciado sometimes need the help of others to help bring the songs inside his head to life. 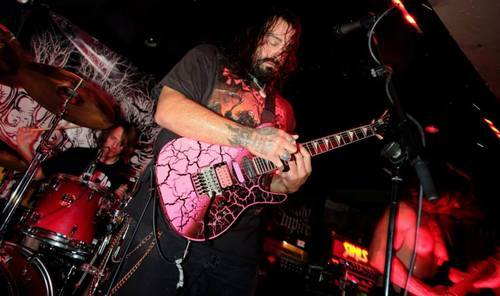 Scare Crow (middle) and his creation, Never We See, play to the assembled masses at Cobra Lounge in early August.  Photo Courtesy of John Mourlas Photography.

Sticking to the “specific sound that Never We See has” may not be too incredibly difficult since most of it comes from one man’s brain, however, that doesn’t mean that it isn’t subject to evolution and change, just as all life is around us.  “The new music that I am currently writing definitely has a different feel altogether (from previous works).  I like to write songs fitting to the perceptions I vividly explore on a mental level, and with this new album, I want to push myself not only lyrically and musically, but [also to] explore more challenging compositions.  Since the first album was a challenge on its own, I feel like it was a great hurdle to overcome, because it not only made an alien feel like a more confident writer, but it allowed me to tap into an even more eccentric style of writing,” says Preciado, and if you have ever taken in one of Never We See’s live shows, you can tell that his confidence is growing by leaps and bounds, and this can only mean good things for the future listening pleasure of his fans and supporters.  This doesn’t mean, per se, that he is absolutely comfortable in the studio yet, though.  “I hate recording, because I am an artist who likes to write whilst alone, and a performer who likes to perform their art.  All the bullshit in between is taxing, but I think in time I will mature into the world of recording in ‘studio’”, declares Preciado, and while it may seem like a necessary evil to him now, your humble music critic is quite certain that the quality of the next Never We See recording will be as top-notch as possible, as I get the feeling that the artist will settle for nothing less.

More than anything, though, Never We See is more than just a band that plays music and that’s all there is.  No, it is a vision, a concept, an idea that goes well beyond the music itself.  “I want people to become a part of the Never We See cult, not because it is something to belong to, but because the sole purpose for me doing what I do is to shed understanding on people from all walks of life. I look at N.W.S. as a very different band, one that can easily be overlooked by the masses of people, and I am perfectly happy with that.  We don’t have a ‘metal’ name. The C.D. cover is so ambiguous that if anyone were to find it in a record store, [they] wouldn’t even know that it is metal project.  The people who are in my band don’t feel as though they have to dress some way to fit in to any genre style, and N.W.S. will never change its ways to fit into any style of any kind,” says Scare Crow emphatically, and continues, “If you follow the mold of writing, creating, living, breathing, and simply existing in the ways that society intended, I find it quite impossible to create innovative art.  Everyone says, ‘Think outside of the box.’  Well, I like to literally ‘live outside of the box.’  It is very easy to say, but very hard to do.  I guarantee, though, [that] the music I release will be of its own nature!”  Of its own nature, indeed, Never We See’s music can be cumbrous at times, pensive at times, dark and sorrowful, intrinsic and inquiring…it can be anything that Scare Crow dreams it to be, and it is this kind of exploratory verve that has gained him not only the attention of many of the Chicago metal faithful, but also of one of its favorite sons and band members, who recently tapped Tim on the shoulder to join their ranks.  Although kept on the down low for quite some time, it was announced earlier in August 2013 by Blake Judd that Scare Crow is now a recording and touring member of the Chicago black metal legends, Nachtmystium, whose expeditious take on the mostly Scandinavian genre has brought them international attention and acclaim.  Judd apparently feels that Tim’s adventurous and deep-delving musical tastes and expressions are a perfect fit for Nachtmystium, and I couldn’t agree more.

As it stands, though, Never We See is still forging full speed ahead, or at least as fast as Tim’s creative juices will sustain a pace known as “full speed ahead.”  The unorthodox approach he takes to life and music has brought him to the precipice of an incredible musical career, and he wouldn’t have it any other way. “In a perfect world, Never We See will be signed and ready to release this new album by February 2014,” says Preciado, not at all beating around the bush as to the intentions of his own music career aspirations or those for his brainchild, Never We See, and as I think about it, it is probably this kind of no-nonsense attitude that makes listening to the music and watching the live shows that the band puts out and on so intriguing and mesmerizing.  Never We See induces its listeners to think, to dream, to feel, and to peer introspectively into their own minds with its lyrics, sweeping solos, and compositions.  While it may take some time for Scare Crow to finish crafting his next masterpiece, it is this attention to detail and unwavering inability to compromise quality for quick satisfaction that makes the wait not only bearable, but also anticipatory.  Whenever the next work drops like a bomb from the belly of a pierced beast, you can believe that its included works will be thought-provoking and well-polished, and personally, I can’t wait to hear the finished product, however long it takes. 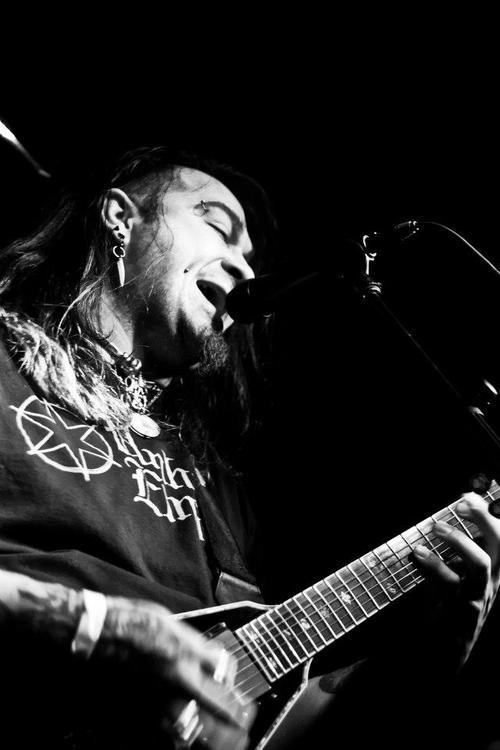 Preciado in his element.

You can find out more about Never We See and listen to the music here: