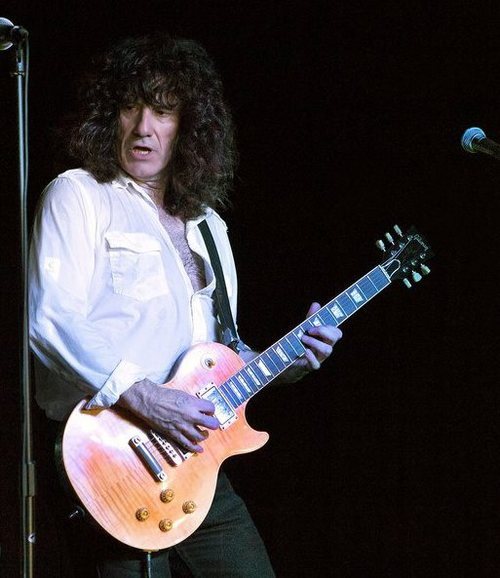 Michael Tafoya’s musical legacy runs deep. From his days with The Boyzz (from Illinois), and then later The B’zz, both bands were signed to Epic records and Michael has toured with national acts like Aerosmith, Rush and REO Speedwagon.

Staying true to the artistic instinct has its ups and downs. After nearly two decades of touring and writing, Michael’s decision to follow his own musical direction left him living by himself, homeless for two years.  Pressing on, Michael began frequenting open mic sessions, networking with other musicians to put together the band that would allow him to stay true to his own sound.

Michael style is described as “New Classic Rock.” Staying true to his roots and the music he loved to listen to while he was growing up, Michael’s music will appeal to anyone with a love and nostalgia for the music of the ‘60s and ’70s, who love the style but might be tired of hearing the same old songs broadcasted by the classic rock stations.

You’ve been doing this for a long time. How did you got your start in music?

I’ve been playing guitar since I was around 9 years old. Before that it was ukelele. I took lessons then at the Austin Conservatory of Music in Chicago. I played in bands all through school since about 7th grade, during the “garage band era” in Chicago in the mid-’60s. I worked and thought it out as well as possible for my little baby mind. I was serious and I wanted to do this!

What are some of the highlights of your long career?

Vintage video of the B’zz from Illinois

I’ve had many highlights, yet I don’t feel I’ve started. It’s funny how that works. The Boyzz, the B’zz era shows, and Hallmark days were a biggie for sure. Starting my “own” band is a big highlight; there was a struggle on what to play and how to go about finding my own voice musically.

Tafoya’s Lost Boyzz perform “Boogie with me” at River Rockhouse in St. Charles from Ed Peterson on Vimeo.

Do you have a song that you’ve written that is special to you?

That’s a tough one to answer. All of the songs mean something special to me. They are like my children.

If you could spend the day with anyone in history, who would it be?

So many choices. John Lennon is in the top of my short list.

Learn your instrument first. I don’t just mean the tech stuff. I mean learning how to hear yourself as you play as opposed to listen to yourself. There is a difference. I’m always learning and relearning this stuff, so don’t get discouraged. Copy from everybody, embrace it, and then make it your own.