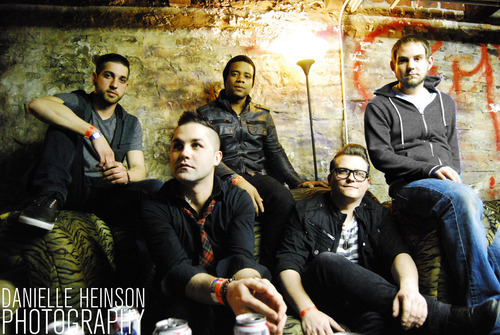 Makeshift Prodigy can be described as “…passionate …exciting and dedicated…” as well as inspirational and motivational. Over the years, this local band has made a name of itself for the way their unique symphonic rock fusion has effected and affected the mind, body and soul.  With three albums to the band’s credit, Makeshift has also been known to sell out local venues like Cubby Bear, Angels & Kings, and Reggie’s Rock Club. Soon in August they will embark on their biggest challenge to date – Lollapalooza. Recently, SouthSide was lucky enough (via telephone) to chat with Anthony (front man on vocals, piano and guitar) and Brandon (vocalist, hype, keyboards and ambience) of this hot rising indie rock band before their Vocalo.org radio appearance if life has changed since their signing with Atlantic records to how excited they are about their upcoming Lollapalooza performance and much more.

Well, you can add the words “modest” and “humble” to the list of descriptions about Makeshift Prodigy since that’s how they were at the beginning of the interview after SouthSide lightly teased them about being rock stars. Actually, according to Anthony and Brandon, the band is “…excited about what we do [by] sharing the music and love playing with other people and bands…” plus they “…love representing Chicago…” in between the million of reasons why they’re dedicated to their fans. On that note, this reviewer wondered if a world tour some day was in the works for Makeshift. Brandon replied that it was something the band could see in the future but right now they’re taking things at a “…day to day status…” Makeshift has toured the east coast in which they stated it helped them mature and the band plans to tour more like a college campus tour in the Fall and the west coast. Just enough to not only open doors for Makeshift but also get their name out there while promoting the new album, “Illuminate.”

In the meantime, Makeshift Prodigy are currently in the works (though nothing was definite at the time of this interview) of talking with different organizers to perform at summertime festivals (i.e. Milwaukee’s Summerfest) and was preparing for their appearance on Vocalo.org radio and JBTV (happening May 5th in front of a live audience). Recently, an acoustic version of their hit single Chasing Daylight was released on purevolume.com. Brandon did disclose to SouthSide that the band is planning to do a music video for another song off the album. About their Lollapalooza appearance? Well, that, according to Anthony and Brandon, that feeling really hasn’t hit them yet but they’re very excited about being part of the huge music festival. Makeshift will have new things as well as old favorites in store for the lucky fans and Lolla attendees who were able to grab single-day tickets before the entire three-day fest sold out in minutes. SouthSide, always the optimist about things, lightly teased the guys about having to handle the media and press while there despite not being one of the bigger named headlining acts. To quote Brandon, “..looking forward to riding the wave, I guess…”

And if you think the band has changed since signing with Atlantic, then you’re completely wrong. Makeshift Prodigy is still pretty much the same …they’re still a DIY (do it yourself) band except they have been getting a little more press these days.  Though it does take a little more time to record an album, the guys mentioned the representative at Atlantic do “…keep us on our toes…” since “…the work is even more harder…” Not worried, according to Brandon, “…everything’s good so far…” The main thing about Makeshift you can take to heart – the band retains creative control over their music because that’s important to them. It wouldn’t be Makeshift Prodigy if they had Atlantic hire songwriters, a full production team and/or arrangement to create the next Makeshift album. It would definitely sound different compared to the inspirational, soul-filling music that uplifts when you’re down or motivates when you need that extra push. Unfortunately, Makeshift doesn’t get see or experience what SouthSide and many others have during their live shows, . However, they are grateful for reviews like from SouthSide and other members of the press about their shows. It’s “…great to hear [an] honest opinion about our shows…”

Speaking of their next album …well, according to Makeshift, they’re always writing and recording some new tracks in between shows. For now, Makeshift is hard at work showing new faces their new EP, Illuminate to which they will try to tour with. So SouthSide wondered which track off the album would Anthony and Brandon suggest listening to. She would get five different answers from all of the Makeshift members. The guys suggested listening to the entire EP “…we love all of our tracks…” says Brandon while Anthony added “…took us a long time to create [them]…” Compared to the first two albums, Illuminate is more a mature sounding Makeshift album even though retaining that same symphonic rock fusion but with more vibrant energy and motivational feel. When this reviewer first heard the EP at a listening party, she immediately noted how the band’s sound had gradually progressed as if they themselves were evolving along with the music. The heartfelt tenderness and inspirational words are still there in songs like Miracle and Perfect Mistake where you’re meant to experience the tidal wave of rhythms, melodic crescendo, and upbeat momentum especially in A Way Out (Makeshift’s follow up track to Revolution off “Mathematica”).

Sadly, like this interview, all good things had to come to an end, , and Anthony and Brandon wanted everyone to know that if you’re “…looking for something inspirational …or a music lover in general…” give Makeshift Prodigy a try. Also “…we like to have fun though the music can be serious but we’re still cool people …come out and meet us …we’re friendly…”

For more of Southside’s reviews visit her blog at
southsideonthetown.blogspot.com