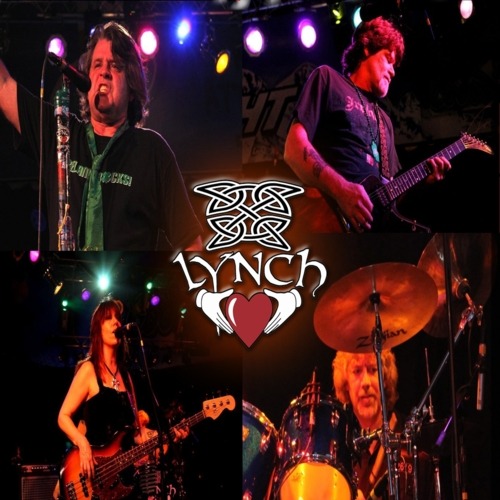 There are good songs, there are nice songs, there are songs that make you want to dance and songs that make you want to cry. Then there are THOSE  songs.., you know, those songs that get down under the skin of your heart.  They may take you back into the arms of a long ago lover, or the old friends that you used to share a six pack with in the forest preserve where everyone would meet when nothing else was going on. How do these kind of songs come about? Is it by design or creative happy accident? Whatever it is, the band Lynch certainly has the knack.  Take their song “Lucille” for example. The slow driving heavy beat pulls you in even before the poignant vocals of Danny Lynch begin. Hes not just singing the song, he’s living it, feeling it, like that long ago memory I spoke of, and he’s taking us there with him.  Danny is definitely not your run of the mill rock singer.

Comparisons are inevitable. Everyone does it and I cant help but be reminded of a young Eric Clapton in his Cream/Derrick and the Dominoes era when I listen to Mike Burke on guitar. There’s the blues influence rooted underneath the rock and roll sensibility.  At times I’m reminded of early Montrose. They definitely can rock.

Some bands need a rhythm guitar player to fill out their sound. There’s no need for that here with Deb Altman on bass. She’s filling things out quite nicely thank you, and bringing a very cool vibe to the live performances.

Along with Deb, Frank Pace anchors the song with his Bonhamesque accents, although at times I hear a hint of Ginger Baker, he creates a perfect balance , adding that wonderful  bottom layer to these multi dimensional songs.

RIC: When did Lynch come together and how? (Mike Burke felt that Frank Pace answered this question best)

Frank: Lynch came together in 81’ when my brother- in- law recommended me to our original bass player Ken Olsofka, who was looking to start a band. Our first jam was in my basement with Ken, a guitar player and I doing Iron Maiden covers. When it was obvious the guitar player we had wouldn’t work out, Ken knew Mike, who was searching to join a band. Mike came and saw us at a party we played at, no singer just music, and was interested. The 3 of us got together and played “Mr. Crowley” and we knew after that one song we had something. After trying various, horrible singers Mike got a line on Danny Lynch who was in between bands. We invited him over and instant chemistry. We had another guitar player also who was not working out and added Joey K, at only 15 but could play.
After a few years in-fighting and various other problems that bands develop, it led to the band breaking up. Years later, the original bass player and I got in contact with Mike and Dan and got back together. Sounding better than ever, we recorded a CD where again, problems arose. Ken had a certain sound that did not work well for us and that led to him leaving the band. With a show only a few weeks away, we recruited Deb Altman who learned all the songs in 2 weeks and played them well. We invited her to join the band and we are sounding our best yet!

RIC:Who has influenced you musically?

Mike Burke: For me it was Thin Lizzy, UFO, Rory Gallagher, Black Sabbath and Y&T. Y&T’s Dave Meniketti is one of the best all around musicians in the world, the way he can sing and play from the heart is unlike anyone. And BTW it was at a Y&T concert at Chicago City Limits where I saw Frank And Ken back in 2008 and thats the reason we started playing again so I owe them that too LOL!

Deb Altman:  I am a huge fan of Led Zeppelin, each member of that band is an influence on me especially John Paul Jones. I am also extremely fond of John Entwistle of The Who, even though my style of playing is 180 degrees from his. I’n also a big fan and student of ‘60s and ’70s pop, rock and R&B, you know, listening to the radio, and ’70s hard rock.

Danny Lynch: Some of my earliest influences are Chuck Berry, Johnny Winters, The Rolling Stones, Jimmy Hendrix, Mountain and Nat Stuckey. When it comes to writing songs some times things roll around in my head & I’ll tell Burke and he will say with his guitar you mean something like this, then we work it out from there.

Frank Pace: My influences are Rush, Y&T, Toto, and anything with Kenny Aronoff, Jeff Porcaro, and Simon Phillips

RIC:How do the songs come together? Who are the writers in the band

RIC: When did that creative urge to write/play music hit?

Mike Burke: Started playing at 13 and right away I hated playing other peoples music, my first original was at 15 years old and it was horrible but it was mine. That was good enough for me.

Deb Altman: As a child I listened to the AM radio constantly and always knew that I was more than just fond of the music, but that there was something deeper in it for me, I didn’t really know what. When I was around 5 or 6 I had the strong desire to play drums and left the Sears catalog open around Christmastime to the page with the drum kits on it hoping my parents would get the hint, they didn’t but I built my own drum kit out of round cardboard boxes, they some kind of potato chip boxes or something like that and I’d drum along to the radio or 45 records that we had. In second grade I began taking violin lessons and music went that way until I discovered boys in about 8th grade at which point it was no longer cool to play violin. Had I known what a valuable role a killer violin player was back then for sure I would’ve stayed with that. I still play a bit now for some recording and demo work here and there. I picked up the bass guitar eight years ago when I  was dating a drummer and I wanted to play drums too, and he was, like, “well we can’t BOTH play drums, there isn’t enough room in my living room for two drum kits!” So I picked up the bass guitar and we’d have our jam sessions in the living room. I joined my first band about three months later, Evil Jezebel it was called, an all Elvis Presley band. Just bass, singer and guitar, no drummer!

Danny Lynch: When I was very young there was always someone singing or playing music around the house.

Frank Pace: My sister was quite a bit older than me, and she had Iron Butterfly’s live album. I was 6 years old and she played IN-A GADDA-DA-VIDA, and I heard the drum solo and was immediately fascinated by the drums. Also my neighbor was a drummer and I would hear him practice and thought “that’s what I’m going to do one day” But it wasn’t till years later when RUSH and Neil Peart entered my life at 15 that I became serious and thought this is what I want to do the rest of my life!

RIC:Describe your style to someone who has never heard the band

Mike Burke: I have a friend, Mike Gould the singer in Spyderbone and I love his description of us “If Montrose and Tesla gang raped Thin Lizzy-Lynch would be the result! Yeah it’s a bit rough but I love what he said!

Danny Lynch: I would describe our music as hard rock rhythm & blues!

Frank Pace: Our style is melodic hard rock with a small amount of Blues mixed in.

Mike Burke: We opened for Y&T in July of 2010, it’s gonna take an awful lot to top that one, they are my heroes and my favorite band in the world! We opened for Pat Travers…….that was second place!

Deb Altman: My most memorable show is hard to say, we’ve had such great fortune in playing with such incredible bands as Y&T, Montrose, Joey Belladonna, Pat Travers Band. I’d say my most memorable is the Pat Travers Band show, I had seen Pat Travers back in the ’70s here in Chicago and was blown away by him then and always loved that bluesy rock style of his. Always a big fan of his. And there he was at the gig, and he and his band were so great to us, and I’m like, "man, how did I get HERE, playing a show with Pat Travers?!” As the opening band, we were surprised to be playing to a packed house with super enthusiastic Pat Travers fans who were running up to the stage and then screaming for us to play more songs when we were done. When does that happen for the opening act? They are usually, like, get off the stage, we want the headliner, right?! After we played we went out into the audience to watch Pat Travers and his guys play and the fans were stopping us for pictures and autographs and shaking our hands I felt like we were the Beatles or something. I don’t mean to sound like a hick or anything but that was just wonderful!

Danny Lynch: One of the best gigs so far would have to be playing with Pat Travers, the place was jumping from the first chord to the last note!

RIC:What can someone expect from a live Lynch show?

Mike Burke: Heart and Soul, I think that’s something that’s missing from a lot of bands these days!

Danny Lynch: I want people to feel the music and see the interaction between us as a band to put it all out there is so cool .

Heart and Soul. Yes, that’s definitely what this band is about.