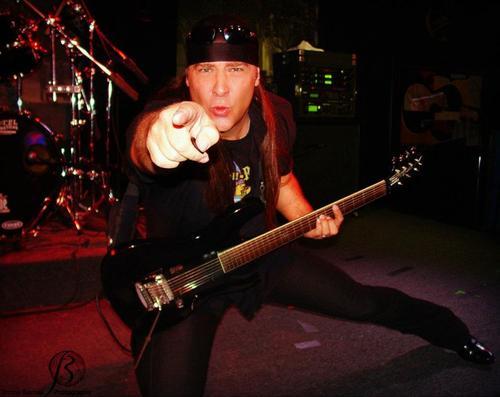 I recently had the pleasure of interviewing David Shankle about his band The David Shankle Group (DSG) . David talks like he plays, fast, intense, and in great detail. I could probably write a novel about his life and experiences in the music biz, but for the sake of the article I have to condense.

Where do shred demons come from? Well as they say about apples and trees, I was not surprised to find out that David’s father had been a guitar player and teacher, similar in style to Roy Clark. One of his father’s more famous students was Ringmaster Ned from Bozo’s Circus, who he instructed on banjo for 5 years. David’s father tried to start him on guitar lessons at age 8. However young David wanted nothing to do with it. It was later at age 13 that the interest began. Listening to Aerosmith, Montrose and all kinds of rock and metal, David became interested in knowing how to do what these guys were doing. He was also a huge fan of Evel Knievel, the famous motorcycle daredevil,  so on his 13th birthday his father asked him if he wanted a dirt bike or a guitar. Mom stepped in and said he would live a lot longer playing guitar so the choice was made. David already had a need for speed, so if it wasn’t going to be a dirt bike, he would find it with the guitar.  With a Les Paul-style guitar in hand and a Univox amp, David devoured any books or videos about guitar instruction that he could get his hands on, he wanted to know it all, every style and method. His good friend Howard Anderson, also a guitar instructor, taught him how to play the blues. David played out in the local clubs, entering and winning many guitar competitions.  He began courses at College of DuPage to study classical guitar and theory.

About a year into his schooling, he was playing at The Thirsty Whale with a band called Vengeance, when he was approached by Joey DeMaio and Eric Adams, who persuaded him to join Manowar. They told him to sell his car, quit his job, learn the songs, you’re now on the payroll and an official member of the band. Joey named him “the Death Dealer” because as he said, “this guy plays over the neck with two hands faster than most guys do playing regularly”. David became part of Manowar while the “Kings of Metal” record was being mixed. After the tour to support “Kings of Metal”, David contributed the music to many of the songs on The Triumph of Steel album, which went platinum, namely “Ride the Dragon”, “Master of the Wind”, “The Burning,” “Demons Whip” and part of the music to “Power of Thy Sword.” Other accomplishments include setting the record for the loudest guitar player without a P.A.

After 7 years with Manowar, David went back to school, attending Roosevelt University. He studied under Frank Dawson, and world-renowned classical guitarist Paul Henry. While finishing up his degree, the idea for the David Shankle Group was born and David started writing songs for the “Ashes to Ashes” album and concentrated on putting the band together. In 2007 his second DSG album, “Hellborn”, was released on Magic Circle Music at the Magic Circle Fest. (“Ashes to Ashes” was also Magic Circle Music) 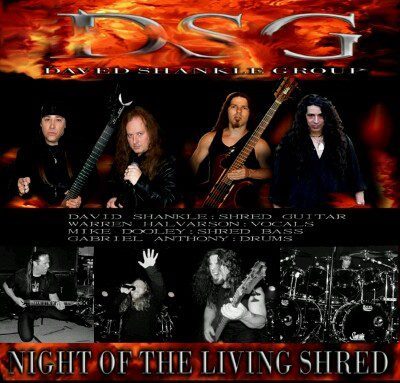 David is currently working on a new CD to be released through his new label, Pure Steel Records out of Germany. David works with Jay Walsh of Fairview recording on all his projects and Jay will be doing the mix down for the upcoming CD, “Still a Warrior”.  David also stays busy teaching guitar, he has been a professional teacher for 25 year offering online lessons, in house private lessons and at music schools.

One of his top students is Jake Dreyer of White Wizard, a band now successfully touring. Jake studied with David via Skype for 5 years. And if this is not enough to keep him busy, he also has several endorsements with several companies, most recently an agreement with Grosmann Guitars to release the signature David Shankle guitars, the “DS6” and “DS7”called “The Shred Machines” Another recent accomplishment that David is extremely excited about is his part in the soon to be released DVD for the movie “Jezebeth” a dark, gothic, horror movie by Damien Dante. David plays what is being called “The Demonic Solo” There is a bonus video of David performing the solo that is available only on the BluRay version of the movie which will be available this year. This is being marked as one of the fastest solos around, so you need to hear it.

DSG is conquering Chicago, with the new label, Pure Steel Records, providing strong support for worldwide distribution of the music, overseas shows and promotion are on the horizon for DSG Group. David is very proud of his current line up. Gabriel Anthony and Mike Dooley are the powerhouse rhythm section; you will feel the tremors under your feet when they hit the stage. Warren Halvarson delivers a vocal performance of precise intensity and force. The Shred Demon himself rounds out the foursome with his screaming leads, fingers almost seeming to float above the strings for a feast of both sight and sound. All the players in DSG bring a professional performance. No matter what venue you see them in, you will feel like you just attended a concert performance.  David is indeed, Still a Warrior.

The DAVID SHANKLE GROUP is:

You can catch the David Shankle Group live with Psycho Sister and Fatal Havoc at the River Rock House in St. Charles on April 13th. 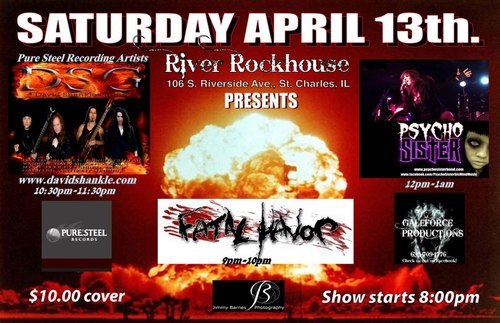 David would like to give credit to all the people that help make David Shankle and DSG Group a success.  Anyone interested in guitar lessons, or in obtaining information for any projects or merchandise that David/DSG Group is a part of, please follow the links below: