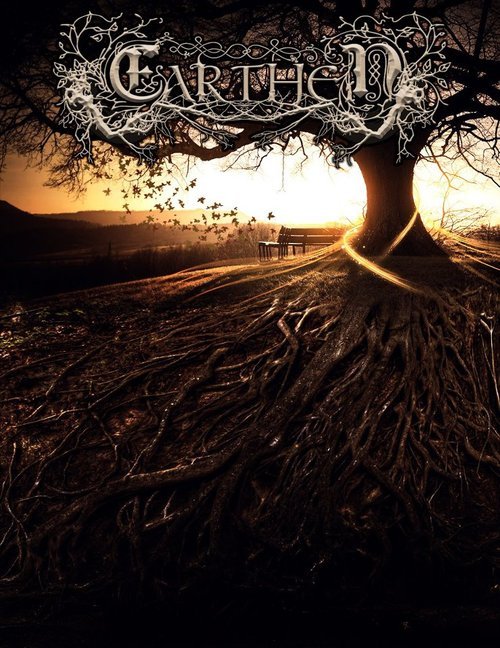 There are some bands that are cardinal in their personnel and sound, look no further at classic bands like AC/DC who’ve maintained the same lineup and exact sound over an almost 40 year career, and then there are bands that change like the seasons, that evolve in someway, along with the experiences of the personnel involved. Earthen is one of those bands, that with a simple premise has evolved into something majestic and powerful, creating a sound that reflects the naturalistic themes in the lyrics that is deeply rooted in classic music while still creating something that lives and breathes, as founder Mike LeGros puts it “we’re a heavy metal band of like-minded invidiuals, with basic pagan beliefs, writing songs, singing about the earth…Think newer Amorphis meets (Metallica’s) “Ride the Lightning.”

Earthen was started by LeGros in 2006, after spending many years fronting his own band, the well known death metal group Disinter, filling as a bassist for metal legends November’s Doom, Jungle Rot,and as a guitarist for the experimental black metal group, Nachtmystium.
Beginning as The Narthex Project, Mike began writing material with a few collaborators for a heavily folk-influenced female-fronted acoustic act. “I see myself more in Earthen as a songwriter than just a musician, I love a good song, I care more about writing a song than learning a scale, or more on my instrument.” Over the course of 6 years and a continuously changing roster of 30 musicians, Mike amassed an enormous amount of material that became a collection of song cycles. Instead of going a traditional route of getting a label to distribute each album, Mike creates unique handmade packaging system incorporating elements from nature－leaves, branches, amber－that helps illustrate the band’s interest in the natural world, serves as a document for ALL the music created since Earthen’s inception.

The core band, in LeGros’ opinion, “the tightest line-up,” includes LeGros on guitars, Mark Piotrowski on lead guitars, Drake Mefestta on keyboards, has been most recently been joined by Brian Rush on bass, Tom Naples on drums, and now with Brittany Sven and Milosh Gabrilo on Vocals.

Mark and Mike are both long time veterans of the Chicago music scene, and have known eachother since back from the days of trading tapes in the underground metal scene. Their shared influences of classic thrash, early European extreme metal bands like Hellhammer, Venom, and neo-classical shredder Yngwie Malmsteen (the band does a stellar cover of I Am A Viking), really define the core of the bands sound. Heavy, tight harmonies, and also tastefully melodic. Mark was initially hesitant on Mike’s invitation to join the band at first, as he was giving up music after putting in many years as a lead guitarist, most notably in the band Experiment. “The premise of the project and the material really drew really me in.” Personality-wise the two balance eachother, where Mike is more patient with developing the sound Mark adds “Mike really sees the big picture, guides the process as our songwriting conductor…. Me, I’m way too impulsive – I gotta be right in (the moment of) it.”
Mark’s spontaneous flair adds for a bit of unexpected, especially with the guitar solos.
“You ask me why is Earthen good? You can hear a story happening with the music, it makes you think of a landscape, it’s massive, full.” Commenting on the freshness of the material and the performances “Its never the same thing twice, if you sit and listen to the music, there’s always something new.”

Keyboardist Drake Mefestta has been a member of the band for six years, started off hired as a live player, and then slowly started recording with Mike, initially dropping in and improving the keyboards to “Forever Forgotten” and is now contributing heavily to the arrangements. Drake’s work definitely adds the atmospheric quality and orchestral dynamics to the bands material, particularly on particularly on songs like “Victory of the Sun” and “Kingdom.” His influences from folk music, particularly Celtic and flamenco, and from bands like Kamelot, Dimmu Borgir, and Avantasia helped Drake with developing the arrangements “When I came into this band I had to learn to simplify, learning Mike’s core mantra – less is more.” Drake really appreciates the positive view point of the band, he really resonates with the messages in the lyrics “It’s music with a purpose….nothing is permanent, the system of the seasons; a commentary what was, what is, and what will be.”

One of the newest and younger members of the band is drummer Tom Naples, Tom was referred to the band by his older brother Garry, who currently drums for Novembers Doom. Tom brings a great sense of dynamics to the band, a style reminiscent of Bill Ward from Black Sabbath, and Dave Lombardo from Slayer. “I love the fact that it sounds like folk metal, but its heavier than a lot of the folk metal bands out there, that’s what really drew me in to the project”

As the forces of nature that make up Earthen endure more change, they are releasing an new EP “The Renewal Of The Cycles” with their vocalists Brittany Sven and Milosh Gabrilo this winter. They will be releasing a full-length later this year.

You can catch them at their February 17th show opening for Uli Jon Roth at Reggies, and March 24 doing an acoustic set opening for Anneke Van Giersbergen with November’s Doom at Ultra Lounge. 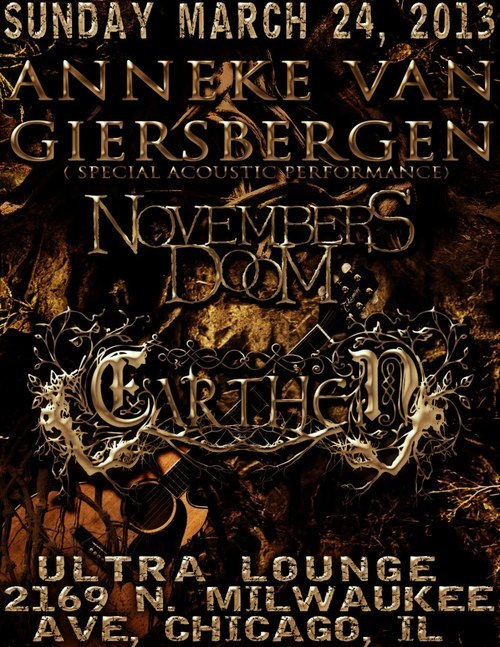 Earthen’s Track Forever Forgotten was featured on the November 2012 Rock in Chicago Show.