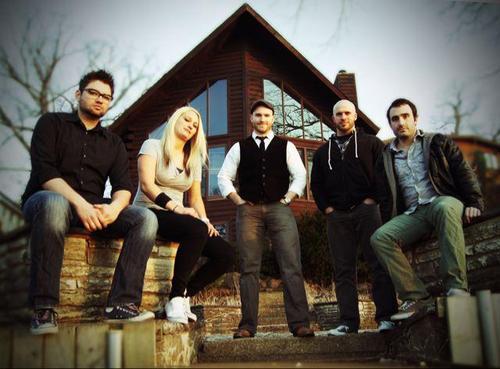 Marwood’s Fall is hard rock band that began in 2008 by brothers Matthew and David Danaher and John Eggan. They just released their debut EP “Restitution” in April of 2013 and are currently playing shows around the Chicagoland area.

Hi, I’m David, and I’m the lead singer of Marwood’s Fall.  I hoped this would be more of a collective band response, but my guitarist/brother (in that order) left for a missions trip to Honduras before I could get good responses from him.  So instead, I’ll be the main voice in this interview.  Prepare to be bored!

How long have you been together?

Matthew, and John, and I began jamming together in 2008.  Erin joined the band in late 2011, and Ben joined earlier this year.  2013 is really our inaugural year, though, since we waited until “Restitution EP” was done to begin playing live.

How did you meet?

Matthew and I met shortly after he was born, but he didn’t talk much at first.  I met John through a college friend who was jamming with me at the time.  I introduced them both to Matt in 2008, and the original band was formed.  We parted ways eventually with our fourth, and began looking for another guitar player and bass player.  John introduced us to Erin and Drew, both of whom played with John in a cover band for some time.  We began rehearsing to record our EP,  but Drew took another opportunity shortly after we finished our recording, leaving a vacancy at bass earlier this year.  That spot was quickly filled by our friend, Ben, whom Matt and I had known for years, through having attended the same college.  Ben and I also played in the same bagpipe band together.  Yes, I said bagpipes.  I know, mind blown!

How would you describe your band’s sound?

I would describe our music as riff-driven, melodic, hard rock. We are still developing our identity, but currently I’d say we’re the Venn diagram where Breaking Benjamin, Killswitch Engage, Thrice, and Brand New intersect… minus their collective success…

Who writes the lyrics and what is your inspiration for writing?

I write the lyrics primarily.  Matt is also a good lyricist, and sometimes provides constructive criticism of my lyrics, but John just draws pictures, so usually when we begin working on one of my songs, my lyrics mostly stick.  For me, personally, music is a release.  It is the opportunity to exorcise the little demons that can lodge themselves within.  Thus, a lot of my writing so far has been a bit morose, inspired by loss of loved ones, broken hearts, and betrayal.  I am a Christian, so even some of the darker songs include overtones of redemption and hope.  The serious subject matter doesn’t, however, really reflect my personality, or that of the band.  I am actually a pretty light-hearted person, and our band rehearsals are often pretty comical.

Who were some of your musical influences growing up?

Matt and I had an odd musical start, I would say.  We grew up with parents who didn’t listen to a lot of the classics, per se‘.  I mean, we were raised on the Beatles, of course, but we missed a lot of the classic rock of our parents‘ generation until we discovered it on our own.  Instead, we were introduced to Mozart and Beethoven.  I still vividly remember Matthew at age four or five proudly parading around the coffee table in our living room to Mozart’s “Turkish March.”  Those were our classics.  We were both trained on the piano from a young age, but soon expanded to other instruments.  I think that foundation of music theory and chord structure was quite formative in the way that we write and understand music today.

Our influences expanded as we heard more and more popular music.  Things like Metallica, Blink-182, and Creed (yeah… sorry) crept into our consciousness, but our influences always remained broad.  I listened to anything from epic movie soundtracks to pop “punk” to bluegrass to metal to choral church music to classic rock.  Matt gravitated even more heavily towards the metal and the hard rock, as well as the classics.

As far as the other members are concerned, Ben credits the likes of Rush, Yes, Genesis, the Who, Foo Fighters, System of a Down, and Death Cab for Cutie as his greatest influences.  John lists, succinctly,  Metallica and Led Zeppelin (though that list would have been much longer if he were writing this).  Erin lists AC/DC and “anything punk” as her early inspirations to play guitar, and includes Escape the Fate, Rise Against, and Red Jumpsuit Apparatus as more current influences.

What is one song that you are reluctant to admit that you rock out to in the car?

John: “Just Dance” by Lady Gaga.
Ben: “Glamorous” by Fergie
Dave:  Probably “Umbrella” by Rhianna…“ella, ella, ella, ay, ay…”
Erin: “Slow Motion” by Third Eye Blind (She is way cooler than the boys.) Matt:  Since he’s not available for comment, I’ll just assume that it’s “Gangam Style” by Psy, or whomever we can “credit” for that atrocity.

Fans are always comparing bands to other bands. Have you heard anyone compare you guys to a band that you thought was totally off?

We haven’t heard that many comparisons yet, mainly because we are just in our infancy, but one person suggested that we had a Chevelle quality, but I don’t really hear that.  John had someone tell him that we sounded like Nickelback.  John is still recovering in therapy.

Do you have any shows coming up?

Yes!  Friday, June 21st at Mickey Finn’s in Libertyville.  Come out to see us!  We will also have many more coming up soon, so keep checking our website or our facebook page!